Abraham’s Journey Through the ‘Land of Promise’ 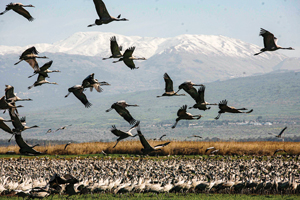 When God promised the land of Canaan to Abraham, what kind of land did he encounter when he first arrived here? Who were the inhabitants of this ‘Land of Promise?’ How did they sustain themselves on the land? And why did the Lord choose the Land of Israel for His people?

The patriarch Abraham came from Ur of the Chaldeans, one of the earliest city-states located in the fertile plain between the Tigris and Euphrates rivers. For centuries, these two great rivers have brought life-giving water and rich soil deposits from well to the north to turn an otherwise arid region into a veritable garden.

The Land of Israel, in contrast, features its own truly unique ecosystem situated at the crossroads of three continents and linking the great civilizations of antiquity. Like other travelers from the East, Abraham avoided a straight trek through the desert and came into the land from the north using a familiar landmark—Mount Hermon.

The three summits of Hermon each stand at over 9,200 feet (2,800 meters) and are snow-capped almost half the year. This majestic mountain guided those seeking to reach Africa or Europe by way of the Via Maris (Way of the Sea). Since ancient times, Mount Hermon also served as a key marker for millions of migratory birds that annually fly south from Russia through the Jordan Rift Valley and down the Nile River to their wintering grounds in East Africa.

As he passed Mount Hermon and the adjoining Golan Heights, Abraham would have encountered the cool, rushing waters of the Dan, Banias, and Hasbani streams, which come together to form the Upper Jordan River. Coursing through the marshy Hula Valley, this northern leg of the Jordan empties into the shimmering Sea of Galilee, called the “Kinneret” in Hebrew for its harp-like shape. At this point, the land begins to drop well below sea level, as the Lower Jordan flows out the south end of the Sea and meanders its way to what the Bible refers to as the “Salt Sea” some 90 miles southward. Here, the briny shoreline is over 1,400 feet (430 meters) below sea level—the lowest point on earth.

Further south, the land slowly rises through dry, barren terrain to the northern end of the Gulf of Eilat on the Red Sea. To the west of the Jordan Valley and Dead Sea, the steep, rocky cliffs quickly ascend to the Judea/Samaria mountain range, running north-south for roughly 100 miles. The land slopes down to the sandy yet arid coastal plain and eastern shores of the Mediterranean Sea even further west.
Abraham started down the lower Jordan Valley but turned right halfway down into the Tirza valley, described simply as “beautiful” in Song of Solomon 6:4. Gradually climbing into the Shomron hills, the narrow valley curves around Elon Moreh, a high, round summit overlooking biblical Shechem (today’s Nablus). Pitching his tent on the lofty peak, Abraham could spy out the land in all directions (Genesis 12:6). 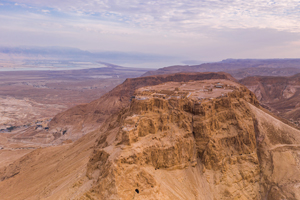 This path also gave him immediate access to the “King’s Highway,” an ancient road running along the spine of the Judea/Samaria mountain ridge that could easily take a person down past Shiloh and Bethel, the Jebusite city we now call Jerusalem, and all the way down to Hebron. Unfortunately, a famine temporarily diverted Abraham to Egypt. But he soon returned to Bethel and followed the highway to Hebron, where he again set up camp, this time by the oaks of Mamre (Genesis 13:18).

Around this period, he resolved the squabbling between his herdsmen and those of his nephew, Lot, by offering to divide the land with him. Lot famously chose the lush plain of the Jordan, near today’s Jericho, and wound up vexed living among the corrupted people of Sodom. Later, Abraham took his flocks to Gerar, near Gaza (Genesis 20:1), and finally to Beersheba (Genesis 22:19).

What we can notice about the travels of Abraham around the land promised to him by God was that he tended to set up camp and build altars to Jehovah on the high places, where he could spy out the whole Land of Canaan. He also stuck close to the water sources, understandable in such a dry climate.

The land he had entered was already claimed by another people, the Canaanites—descendants of the cursed son of Ham. On the other hand, Abraham was a Semitic offspring of Shem, traditionally known as an upright servant of God. This contrast still holds great spiritual lessons for the people of God, as we seek to possess what the Lord has promised us, even if ungodly people also claim it. And as a rule of thumb, any biblical peoples ending in “-ite” (Amorites, Jebusites, Girgashites, Hittites) indicate they were probably Canaanite shepherds living mainly in the hill country of the land. Meantime, the coastal plain was inhabited by the Philistines, who came from Japeth and were largely farmers and seafarers like the Phoenicians to the north. Over the centuries, the Israelites would face many battles with the Canaanites and the Philistines as to who truly was master of the Land of Promise. 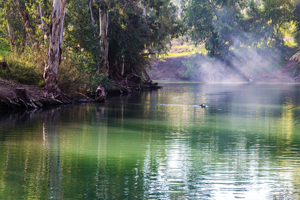 The Lord speaks glowingly of the land in Deuteronomy 11:11–12, saying: “But the land which you cross over to possess is a land of hills and valleys, which drinks water from the rain of heaven, a land for which the Lord your God cares; the eyes of the Lord your God are always on it, from the beginning of the year to the very end of the year.”

Indeed, the Lord listed the seven species of fruits and crops native to the land that would always be there to nourish and sustain them—grapes, olives, dates, figs, pomegranates, wheat, and barley.

They also could rely on the extremely fertile Jezreel Valley—the largest natural breadbasket for a thousand miles in any direction. Yet the promised land also lay on the edge of the desert and was susceptible to drought and famine, which God used time and again to test and correct His people.

As we further explore the “Land of Promise” theme leading up to this year’s Feast of Tabernacles, there is so much more to say about this rich topic and many lessons to take from it for our own walk with the Lord. But we can start with gratitude that Abraham was obedient to the call of God to arise from his own country and bravely go to a land he had not yet seen. It was a journey that came with many difficulties and challenges, yet it brought him great blessing and wealth and eventually made him the father of faith and heir of the entire world (Romans 4:13). And Abraham came to a truly unique, beautiful, and bountiful land that also proved to be a testing ground of faith for the many generations after him. To this day, the people of Israel are confronted with the pivotal question of how much they treasure this special land promised to them as an “everlasting possession” (Genesis 17:8).

We are making plans to celebrate this year’s Feast of Tabernacles and would love for you to join us.