Amnesty International and the Modern-Day Inquisition Against Israel 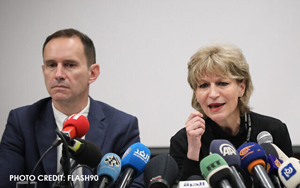 Israel’s Foreign Ministry circulated a report in early January warning that 2022 will likely be the year Israel is officially saddled with the label of “apartheid state.” Unfortunately, their forecast is looking prescient, as Amnesty International published a study this week which concludes that Israel indeed maintains an apartheid system to rule over and suppress “Palestinians” on both sides of the pre-’67 Green Line. The Amnesty report has set off a firestorm of very valid criticisms from Israel and its allies worldwide. But the self-appointed grand judges of the human rights movement, the feckless mainstream media, and the corrupt United Nations are all doing their part to unfairly single out the lone Jewish state for unprecedented scrutiny and unjust condemnation as an “apartheid regime” in what collectively amounts to a modern-day Inquisition against Israel.

What has made the charge of “apartheid” much more serious is that the international community redefined it four years ago as a crime, meaning it should be treated the same as a war crime or crime against humanity.

When that legal change came, Amnesty immediately assigned a research team to start investigating Israel for the crime of apartheid. The result is the newly-released 278-page report entitled “Israel’s Apartheid Against Palestinians: Cruel System of Domination and Crime Against Humanity,” which claims to “show that Israeli authorities impose a system of domination and oppression against the Palestinian people in Israel and the Occupied Palestinian Territories (OPT), and against Palestinian refugees. Laws, policies, and institutional practices all work to expel, fragment, and dispossess Palestinians of their land and property, and deprive Palestinians of their human rights. We conclude this treatment amounts to an institutionalized regime of oppression and domination defined as apartheid under international law.”

Where to start with responding to this sanctimonious drivel?

Among the most egregious flaws are that Amnesty identifies all Arabs in Israel and Palestinian-ruled areas as “Palestinians” and then claims Israel practices apartheid against them all. That alone exposes the political biases of those behind this report.

Amnesty also alleges that Israel was born in sin because it was created in 1948 to be a “Jewish state”, and it has imposed measures ever since to maintain that Jewish majority. This totally ignores the fact that the United Nations itself approved a partition plan for creating a Jewish-majority and an Arab-majority state side-by-side in the area of Mandate Palestine being vacated by the British at the time.

Many critics of the report have charged Amnesty with “antisemitism” by effectively denying the right of the Jews to a state of their own. Amnesty has responded that it supports that right in theory, but it then seeks to criminalize any attempt by Israel to maintain its Jewish majority – something many other states do in order to maintain their own native-ethnic national identity.

One vigorous response to the Amnesty report came from Yoseph Haddad, an Israeli Arab Christian from Nazareth who volunteered to serve in the Israeli army, was wounded during the Second Lebanon War in 2006, and today is an i24 News reporter and an advocate for Jewish/Arab coexistence. Writing in The Jerusalem Post, Haddad questioned why Amnesty would rob him and other Israeli Arabs of their Israeli identity by defining them all as “Palestinians.” He cited several recent public opinion surveys which show that the vast majority of Israeli Arabs are content and even well satisfied with their status as equal citizens in Israel’s democracy and would rather live here than any other country.

“I was born an Israeli, and I will remain an Israeli,” insisted Haddad. “I am entitled to all the same rights as any citizen of Israel. I was a soldier in Israel’s Defense Forces protecting the north of Israel, where most of the Israeli-Arab community lives, from terrorist rockets attacks by Hezbollah… Not only that, but I was also a commander of dozens of Jewish soldiers. What kind of an ‘apartheid’ would let Arabs give orders to Jews? The non-existent kind.”

“As for the Palestinians, the status-quo of occupation is problematic, but still, it’s not based on racial discrimination, but rather on national conflict,” Haddad added. “A conflict that Israel has proven it would like to end on several occasions when it offered generous solutions for peace, before the Palestinians rejected them. If Israel has a racial issue with Arabs, why did we then make peace with Morocco, UAE, Egypt, Jordan and Bahrain? Why then are there so many Arabs who are part of Israel’s government, making decisions that impact every Israeli? Why are there Arab judges deciding on the fate of Israeli citizens in court?”

Other assessments of the Amnesty study have determined that it:

It is also hard to dismiss the thought there might be a pecuniary angle to this report. The focus of most human rights groups has increasingly turned to criticizing Western democracies because they are “soft targets” and it resonates with their donor bases. And Amnesty is clearly guilty of this – just click on the link to their online Israel=Apartheid report and up pops a donation box. I find that shocking when you are laying the serious charge that an entire nation is a criminal enterprise which needs to be dismantled!

The mainstream media has done little so far to scrutinize Amnesty, its motives, methods and researchers. But kudos to the Times of Israel for confronting the Amnesty leaders who showed up in Jerusalem for a press conference this week to unveil their report on Israel. In a separate interview afterwards, the Amnesty team floundered in trying to explain why they chose to investigate Israel first once apartheid was declared an international war crime back in 2017. Sure, they are also investigating Myanmar for its blatant discrimination and suppression of the Rohingya peoples, but what about China and its harsh treatment of the Uighurs or Tibetans, or Turkey and the Kurds? These are open-and-shut cases…

Their answer was that they gave priority to countries where they had easier access to information and the greater possibility of effecting change. In other words, China and Turkey are closed-off authoritarian regimes that get a pass, while Israel is an open society and Amnesty already had contacts with hundreds of local anti-Israel human rights activists and groups who are well funded by European governments and other outside sources. Once the report was done, it would be another log to fuel the already raging fire encircling Israel, trying to raze its very reasons for existence.

Keep in mind that this report also comes as no less than three United Nations forums are currently pursuing their own investigations to charge Israel with “apartheid” and other possible war crimes. This includes:

Taken altogether, the leftist machinery of the human rights movement, the hopelessly ineffective and biased media, the mindless “Flat Earth Society” at the United Nations and so many others have joined together to launch a modern-day Inquisition against the world’s lone Jewish state, and the crime of “apartheid” is the trendy new way to accomplish their goal of eliminating Israel. No doubt, Israel’s diplomatic breakthrough with the Arab world through the Abraham Accords unnerved the Palestinian Authority and their global network of supporters, and they are now working double-time to ratchet up the apartheid campaign against Israel. The self-righteous Amnesty officials who showed up in Jerusalem this week to lay out their bill of charges against the Jewish state and people may not have been wearing scarlet robes and tall miters, but they should have!