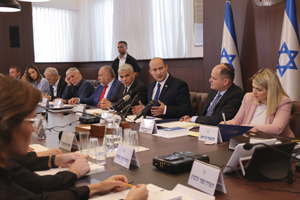 Broad yet fragile, Israel’s new government has held together since taking office in June and is faring better than many expected. Forged around a rotation agreement between Prime Minister Naftali Bennett and Foreign Minister Yair Lapid, the ruling coalition consists of eight diverse Israeli parties united by their common quest to keep former premier Benjamin Netanyahu from returning to power. With so many competing agendas among its razor-thin 61 Knesset members, many wondered whether the new government could survive, much less accomplish anything. But so far, the Bennett-Lapid alignment looks to be on a stable course for the foreseeable future.

Bennett and Lapid represent a younger generation of Israeli leaders who are generally forward-looking and willing to make compromises to promote the welfare of the entire nation. They came in facing numerous challenges at home and abroad – the most immediate being the prolonged coronavirus pandemic.

As the coalition assumed office, many Israelis felt they were about to beat COVID-19 through an aggressive mass vaccination program. But then the more contagious Delta variant slipped into the country and produced a fourth wave of infections over the summer which stressed the national health system once more.

With his hi-tech background, PM Bennett listened to the medical experts, but opted to do everything possible to keep the country and economy open. Rather than strict lockdowns like under Netanyahu, he has largely relied on Israeli citizens to voluntarily follow the health rules and isolate when exposed. At the same time, the new government has continued its strict approach to foreigners entering the country, which means the tourism industry will need more time to recover.

Meanwhile, the Knesset will soon vote on passage of an annual state budget, which previous governments failed to secure over the past three years. And although it appears the budget will pass, there are numerous and often petty disputes among the coalition partners that could easily derail the process, which might trigger the dreaded prospects of yet another election. One serious dispute is over whether Palestinians can marry Israeli Arabs and gain Israeli citizenship. The Arab parties favor such a measure, but many on the right oppose it as a back-door ‘right of return.’

The proposed budget includes investments in the Arab sector to reduce the spiralling rates of inter-Arab crime and violence, and to deal with the root causes of the shocking Arab-Jewish street brawls which broke out during the Hamas rocket war last May.

On the international front, maintaining warm relations with the United States is always a top priority for any Israeli government, and PM Bennett sought to reaffirm the alliance when he flew to Washington in August for his first meeting with US President Joe Biden. The outcome was thrown in doubt, however, when Biden postponed their meeting to deal with his government’s tumultuous exit from Afghanistan. Still, Bennett received passing marks back home for his handling of the crisis moment – largely by remaining silent on the chaotic American withdrawal.

Bennett sought to focus Washington’s attention on the growing Iranian nuclear threat, while also rebuffing any push by the Biden administration for renewed peace talks with the Palestinians on a two-state solution, arguing such a move could easily fracture his coalition.

The Israeli government also is facing US pressure to curb Chinese investment in its infrastructure projects and hi-tech sector, which could give Beijing too much leverage over Israeli policies and access to sensitive Western technologies.

To deal with such issues, the Bennett-Lapid coalition is intent on rebuilding the traditional bipartisan base of support for Israel among Democrats and Republicans in Washington, which may prove tough as next year’s US midterm elections approach. The new government also wants to be proactive in repairing Israel-Diaspora relations, especially among American Jewish leaders who have felt slighted by Israel’s favoring the ultra-Orthodox over the Conservative and Reform movements. With the haredi parties out of government, Bennett and the national religious camp have a chance to bring some needed balance to certain state-synagogue issues, such as allowing civil marriages and non-Orthodox conversions, which would appease many Israelis as well as American Jews.

In addition, the battle against the BDS campaign is a key focus of the new government’s diplomatic and hasbara efforts, as seen in the on-going tussle with Ben & Jerry’s ice cream execs over their garbled and discriminatory boycott of Israeli settlements.

Above all, the Bennett-Lapid government is faced with a momentous decision on how to confront Iran as it closes in on the nuclear threshold (see Israel at a Crossroads on Iran).

Finally, keep in mind that if the opposition Likud party were to replace Netanyahu as chairman, Bennett would come under immediate pressure to renege on his rotation deal with Lapid and move to form a majority right-wing government with Likud.