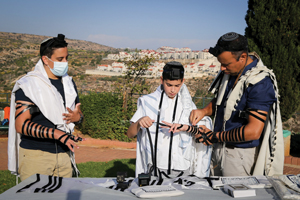 Hear, O Israel: The LORD our God, the LORD is one! You shall love the LORD your God with all your heart, with all your soul, and with all your strength. And these words which I command you today shall be in your heart. You shall teach them diligently to your children, and shall talk of them when you sit in your house, when you walk by the way, when you lie down, and when you rise up. You shall bind them as a sign on your hand, and they shall be as frontlets between your eyes. You shall write them on the doorposts of your house and on your gates. (Deuteronomy 6:4–9)

The Jewish Confession of Faith

This is known as the Shema—the most central prayer in Judaism. It is considered the main confession of Jewish faith. As such it is different to our Christian confessions, which usually are expressed in multiple series of declarations: “We believe …” The Jewish confession, however, is not so much a “we believe” statement but a divine command to hear, to listen to the voice of God regarding who He is—the one true God. The Shema has such a sanctified status: for many rabbis, the short phrase “Shema Yisrael” is equal to the very name of God, many times symbolized with only the Hebrew letter ש [shin].

Every Jew is supposed to pray the Shema at least twice a day, in accordance with the above passage from Deuteronomy 6, that you should say it “when you lie down” [in the evening] and “when you rise up” [in the morning]. This is at least according to the prominent Jewish sage Shammai, who lived around the time of Jesus.

The entire daily prayer is composed of three biblical passages. The first is from Deuteronomy 6:4, which is the commandment to love the Lord with all your heart, all your soul, and all your strength.

The second passage included in the traditional Shema prayer is taken from Deuteronomy 11:13–21, which underlines the prayer’s spiritual significance: Blessing comes with obedience, but if Israel should turn aside from Adonai, they would “perish from the good land” the Lord had given them.

Finally, the third passage comes from Numbers 15:15–41, where the command is given to undertake practical steps to incorporate the Shema into daily customs and rituals. This includes the command to place the fringes (tsizit) on one’s garment, the mezuzot at every door post, and the binding of phylacteries (tefillin) on the arm and forehead—all of which contain the above-mentioned Bible passages. This ancient tradition to combine these passages in the Shema prayer dates back well over 2,000 years and is mentioned in the Qumran scrolls.

Jewish rabbis teach that with every recitation of the Shema prayer, every Jew accepts the yoke of the kingdom of God upon his shoulders.

The Shema is the first prayer taught to a Jewish child when they start speaking, and it is the last prayer a Jew is taught to say on their death bed. It also became especially noted for its dramatic usage during the Holocaust.

Former Chief Rabbi Yisrael Meir Lau has repeatedly told the story of how many Jewish children were hidden in Christian orphanages during the Holocaust. When they searched for the Jewish children after the war, it often was difficult to find and separate the Jewish youths among the Christian orphans. But Rabbi Lau said it was enough just to start proclaiming “Shema Israel”—the Jewish children would instinctively reply with “Adonai Eloheinu, Adonai Ehad.” Many of these rescued Jewish children are still alive in Israel today.
In addition, the Shema prayer was on the lips of the more than one million Jews who perished in the Nazi gas chambers at Auschwitz, the more than 33,000 Ukrainian Jews murdered in the massacre at Babi Yar outside Kiev, and the scores of Jews who died at the execution wall of the Sachsenhausen concentration camp outside Berlin.

The Most Important Command

The question we need to ask ourselves is: Does the Shema bear any significance for us as Christians and for the church? The answer comes directly from Jesus. When asked to identify the most important commandment of the Bible, Jesus replied:

According to Jesus, this commandment carried the highest relevance as the most prominent biblical commandment for His disciples and all who would follow Him. For Christians, it is therefore noteworthy that God defines His relationship to His people most clearly through the means of hearing “Hear, O Israel!”

God could have used several other senses to define His relationship to us. Besides hearing, we also have taste, touch, feeling, seeing, and even smelling. Jesus Himself repeatedly called His disciples to “come and see.” He could have chosen even Psalm 34:9 as the defining verse of our relationship to him: “Taste and see that the Lord is good!”

The medieval cathedrals—with their spectacular stained-glass windows, gold-covered statues, paintings, and frankincense that filled the air—touched exactly these senses. But the hearing part fell woefully short, as the sermons back then were delivered in Latin, a language few understood. Even today, our emotions are well served by spectacular new church buildings and holistic experiences in our services, but we often forget that the kingdom of God should be less “show-business” and much more “hear-business.”

The Challenge to Listen

Interestingly, it was with the “hearing” part that Israel often struggled. The prophet Jeremiah repeatedly challenged Israel for not hearing what God had spoken: “Hear this now, O foolish people . . . who have ears and hear not” (Jeremiah 5:21); “Indeed their ear is uncircumcised, and they cannot give heed” (Jeremiah 6:10); “I spoke to you, rising up early and speaking, but you did not hear, and I called you, but you did not answer” (Jeremiah 7:13). Consequently, Jeremiah saw Israel being judged by God and exiled to Babylon.

And if we are honest with ourselves, this was not just Israel’s problem; so often, it also is our problem today. Even the disciples struggled with hearing and understanding the message of Jesus (Mark 8:17ff; 16:14). And this means we all need to be watchful over how we hear. Thus, Jesus admonishes His disciples: “Therefore take heed how you hear!” (Luke 8:18, emphasis added).

That means in the eyes of Jesus there is hearing, and then there is truly hearing. You can hear and yet not really listen to God’s voice. It is this perpetual struggle to hear Him that presents possibly our biggest challenge as believers.

Let’s be honest! How many sermons have we heard, how many Bible studies have we attended, how often have we read the Bible, yet so little has changed in our lives. Too often, we select between what we want to hear and what we deem as not relevant for us. Already in Paul’s time, Christians were drawn to teachers who “tickled their ears,” who taught what the people wanted to hear rather than what they needed to hear. And even more, we often are sincerely touched by God’s voice in a sermon or daily reading, but our busy lifestyles distract us immediately and we become what the apostle James calls “forgetful hearers” (James 1:24ff).

God speaks to us in many ways. Of course, primarily it is through the Word of God—the Bible, and through the preaching of the Word. But often He also talks to us through circumstances or daily lives. But do we hear?

I well remember a visit to Holland years ago. Our national director there, Jacob Keegstra, took me to Westerbork, one of the few concentration camps in the Netherlands. Walking through the forest to Westerbork, we passed by an array of huge radio telescopes directed to heaven. There, Jacob explained me, the faintest signals from space could be detected. I marveled on humanity. We have grown so sophisticated to be able to listen to the slightest sounds from outer space, but there in Westerbork, as in Dachau and Auschwitz, humanity failed to hear the deafening cry of God: “Where is Abel your brother?” And in our busy lives, we cannot hear Him cry to us even now: “Adam where are you?” Shema Yisrael!

Some did listen during Hitler’s rule in Germany, like Pastor Theodor Dipper (1906–1967), who led dozens of other pastors around Stuttgart in hiding and rescuing Jews during the Holocaust, risking their own lives. Or there was Pastor Dietrich Bonhoeffer, who preached regularly against Hitler and his deceptive and evil empire.

But God also speaks today, through Israel. The Swiss theologian Karl Barth wrote in 1967, when Jerusalem was reunited in the wake of the Six Day War: “Now we can read it in the newspapers: God keeps His promises!” But are we listening? Do we react when He speaks? And do we act upon what we hear and see? Shema Yisrael!

God also spoke to His people during the days of Elijah through three years of devastating drought. Life became very difficult as harvests were lost, and people starved and lacked life-sustaining water. For sure, people must have died. But when Elijah’s voice resonated from Mount Carmel: “‘How long will you falter between two opinions? If the Lord is God, follow Him; but if Baal, follow him.’ But the people answered him not a word” (1 Kings 18:21).

The question is, are we listening during this current coronavirus crisis? I am concerned when I hear people say all they want and pray for is just to return to normal, to the life they lived before COVID-19. God spoke to us at the Christian Embassy through the prophet Haggai just a few days before the coronavirus hit. Haggai foresaw a great shaking coming over the world. It is a time of divine reset when God is calling us back to Him, back to more prayer, back to spending more time in His presence, back to reevaluating the priorities in our lives. Are we listening?

While the Feast celebration is over, you can still make an offering that will bless the Jewish people in the month’s to come.