The Insanity of Antisemitism 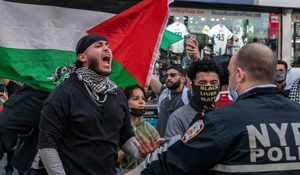 One of the sad outcomes of history is that antisemitism has not just survived in the post-Holocaust era, it has thrived. One would have thought that when the depravities of the Nazi genocide against the Jews of Europe were exposed after World War II, such vile hatred would have disappeared. Alas, it has come back in waves and without any shame.

It also is tragic Theodor Herzl’s hope that the rebirth of a Jewish state would be a cure for antisemitism has failed to materialize. In fact, the restored nation of Israel has become a lightning rod for antisemites worldwide, and a pretext for them to demonize and attack Jews everywhere.

This was borne out once more in recent weeks when another surge in Jew-hatred swept the globe in the wake of the latest Hamas rocket war with Israel. With every escalation in the Israeli-Palestinian conflict here in the Land, Jews abroad have had to brace for the inevitable hate-filled protests and venomous attacks in social media and even on their persons.

While rockets rained down on Israel from Gaza, Jews wearing kippahs (head coverings) were openly assaulted on the streets of American cities. Corporations came under renewed pressure from their own employees to divest from anything Israel. And equally worrisome, Jews were widely pilloried on the Internet. In one high-profile example, supermodel and mega-influencer Gigi Hadid recently told her tens of millions of Twitter followers: “I’ve said it before and I’ll say it again. For me, this is not about religion or one against the other — it’s about the greed,” adding the hashtags “Free Palestine” and “Free Gaza.”

A similar outrageous missive was recently uncovered dating back to 2007 and the eruption of hatred of Jews and Israel in the aftermath of the Second Lebanon War the previous summer. It turns out that Kamau Bobb, head of diversity at Google, is not so tolerant and inclusive after all – writing in a blog post that year: “If I were a Jew I would be concerned about my insatiable appetite for war and killing in defense of myself… Self-defense is undoubtedly an instinct, but I would be afraid of my increasing insensitivity to the suffering [of] others.”

The problem is that when Bobb was recently outed for making these odious comments, he was not fired but merely reassigned to another department. Saying something racist about blacks or native Americans will get you not only fired but completely ‘cancelled’ these days, yet spouting offensive remarks about Jews only means a lateral move at the top of one of the world’s most powerful tech giants.

One of the most odious sources of unrestrained and unchallenged antisemitism today is Palestinian textbooks. A study commissioned by the European Union recently concluded that books and teachers’ manuals used in Palestinian schools, including those run by the United Nations, are filled with anti-Israel incitement and denigration of Jews, thereby seriously undermining efforts for a ‘two-state solution.’ But the EU has tried to keep the report under wraps for four months now. And even though it was finally released late last week, the mainstream media has ignored the story, largely because it does not fit their narrative of the Palestinians as the eternally innocent victims of Israeli aggression.

So what did the EU study find in those textbooks? That the Palestinian curriculum repeatedly encourages and glorifies violence against Israelis and Jews, who are depicted as inherently evil and deceptive. One textbook reminds students of an Islamic hadith (tradition) which maintains that treacherous Jews made numerous attempts to murder the prophet Muhammad. Another schoolbook presents Muhammad’s aunt, who clubbed a Jew to death, as a model of strength and ‘resistance’ for Palestinian women to emulate today. Do you think those little factoids will be reported in the New York Times?

Scholars have tried to understand why antisemitism remains so persistent and rampant in our day, and although they can identify and explain it to a degree, it still remains a mystery. Speaking at the gates of Auschwitz last year, Rabbi Yisrael Meir Lau, a Holocaust survivor and chairman of Yad Vashem, described antisemitism as a “spiritual madness.”

This strikes at the core of the problem regarding this ancient and irrational hatred. Antisemitism is indeed a spirit, and we all have a choice to either agree with it or not. Some revel in it. Others simply blame all their problems on the Jews, using them as a convenient excuse to escape taking responsibility for their own lives.

Many Christians are rightly sensing an urgency and need to stand up and combat the pandemic of antisemitism in our day, before things get totally out of hand. But we must realize that we cannot cure every antisemite from this malady. We can, however, educate and enlighten those coming under its creeping influence in hopes they can be delivered before it’s too late for them.

When we become frustrated that this is seemingly a losing battle, remember we can always try to at least comfort Jews around us by reassuring them that they are not alone. The spirit of antisemitism seeks to make Jews feel isolated and afraid. But this gives us the opportunity to make them feel appreciated and surrounded by a God-given love. And that is a great victory over antisemitism.

Finally, we must remember that to hate the Jews is to curse oneself. In waging this spiritual battle, it is important to consider that even while we are being blessed for blessing Israel, there is a flip side to the equation – namely, those who curse the Jews end up cursed themselves and thereby separated from God. Ever since God declared His divine election over Israel for the purpose of world redemption, the demonic realm has targeted the Jews for destruction. And these dark forces know that if they can turn someone into a Jew-hater, it alienates that person from God. People need to know that – and to be warned and delivered from the scourge of antisemitism for their own sake and sanity.

The ICEJ is committed to fighting antisemitism in all of its forms. Support our work of advocacy and benevolence for the Jewish people.