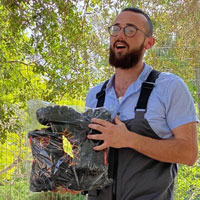 The International Christian Embassy Jerusalem joined Operation Lifeshield on Monday (June 14) in hosting a visit to Israeli communities along the Gaza border to assess recovery and security efforts in the wake of the recent rocket war with Hamas, and to deliver vital security equipment to regional authorities.

Today’s visit by an ICEJ delegation featured the delivery of a portable bomb shelter to the site near the Erez Crossing where IDF soldier Omer Talib was killed in the recent conflict, as well as the hand-over of 120 fire-fighting suits, complete with boots, helmets and masks, for local first responders and volunteer firemen. The field trip also included briefings from local security officials, a tour of the Gaza border fence and strategic overlooks into Gaza, and a visit to the Ashkelon factory where the mobile bomb shelters are manufactured.

Over the past twelve years, the ICEJ has donated 120 portable bomb shelters to Israeli communities near the Gaza border, as well as two dozen fire-fighting vehicles, to deal with the daily threats of terror and arson attacks emanating from Gaza. The ICEJ has another 15-to-20 bomb shelters now on order with Operation Lifeshield.

The solidarity visit began this morning at the Ibim security storage warehouse for the Sha’ar HaNegev regional council, where the fire-fighting equipment was transferred to local authorities.

“There are very complicated security challenges here, which have not stopped since 2001,” Yagil Gatsi, the regional security officer for Shaar HaNegev, told the Christian visitors. “Throughout the recent conflict, we realized where we were missing bomb shelters and sirens and other security measures. But we also realized what we do have – good people who help!”

Gatsi explained why the top-grade firemen’s suits were so needed to fight the daily threat of incendiary balloons from Gaza, adding: “This is a time to say thanks to those who think of us. We pray that we won’t have to use this equipment, that it will be stuck in storage. But the reality is this will give us protection so our communities can continue with their lives.”

“You should know that Christian friends all over the world care about you and are praying for you,” responded Nicole Yoder, ICEJ Vice President for Aid & Aliyah. “We are worried for your safety when we hear about the many deliberate fires and other dangers you face here. This is our opportunity to show our support through our actions, and to encourage you to be strong and courageous.”

Later, the delegation watched as a mobile bomb shelter was lowered into place at a staging area in Nativ HaAsara, just meters from the Gaza fence, which the IDF and Magen David Adom use to evacuate the wounded in times of crisis along the Gaza border. The lone IDF casualty in the recent rocket war was killed near this spot by a Hamas anti-tank rocket last month, but the bomb shelter will now allow the IDF and MDA to coordinate evacuations from the area more safely in future.

Watch this video from Operation Lifeshield of the bomb shelter being delivered: