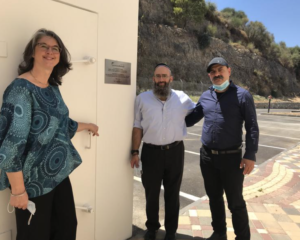 Within four kilometers of Israel’s northern border with Lebanon, the village of Hurfeish is home to a mix of Israeli Druze and Christians. The Druze minority are exceptionally loyal to Israel and consider it a great honor to serve in the Israeli Defense Force (IDF). Many continue in security professions after completing their service with the IDF.

While the Druze and Christian residents of Hurfeish live in peaceful coexistence, the community does face a serious external threat. They live under the constant fear that Hezbollah terrorists operating freely on the Lebanese side of the nearby border will decide to fire rockets into Israel, with Hurfeish right in the line of fire! They literally have seconds to find shelter.

Israel’s entire northern border region is hilly, forested terrain dotted with picturesque villages like Hurfeish. The area is home to around 250,000 residents – an ethnic mosaic of Jewish, Druze and Arab Christian towns and farming communities. One thing they all have in common is a lack of adequate bomb shelters for the local inhabitants.

During a recent spike in tensions with Hizbullah across the border, local council heads learned that the International Christian Embassy Jerusalem had placed over 110 portable bomb shelters in Israeli communities along the volatile southern border with Gaza. So they invited an ICEJ delegation to visit the area and consider donating shelters in the North as well. 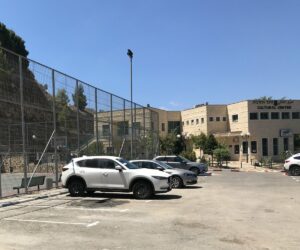 After assessing the need, the ICEJ decided that Hurfeish would be the first village to receive shelters. The heartbeat of Hurfeish is its community cultural center. Usually a hive of activity, it is comprised of an outdoor sports complex and the indoor community center which hosts public events, daily activities, and educational courses. Through the generous donations received from our Christian supporters, the ICEJ recently was able to place two bomb shelters at the facility, giving peace of mind to those who use and enjoy it.

Unfortunately, the delivery of the bomb shelters was not without incident. As the truck carrying the two heavy portable bomb shelters made its way through the hills on the way up to Hurfeish, the driver had to break and swerve to avoid a motorcyclist who suddenly cut in front of him. The biker was spared any harm, but the truck’s heavy load – each shelter weighing 23 metric tons – went flying into a nearby field! Thankfully, no one was injured, but the shelters were now flat on their sides.

A police investigation ensued, while an independent engineer examined the shelters for structural damage. To our relief, the damage was only cosmetic, confirming the resilience of these shelters to protect lives! After repainting the bomb shelters, they soon were re-loaded onto a truck and safely delivered to the eagerly awaiting Hurfeish community.

Nicole Yoder, ICEJ Vice President of Aid and Aliyah, was thrilled to finally see the shelters in place next to the cultural center and the adjacent sports field, complete with dedication plaques crediting ICEJ-Germany for the donations that made it possible.

Hurfeish also has a village church where local Arab Christians congregate and participate in activities. The ICEJ hopes to embark on a second project in this village, which will see additional shelters being installed at other defenseless sites.

The need remains acute, as Lebanon is in the midst of an unprecedented economic crisis due to Hizbullah’s misuse of public funds, and some analysts believe the Shi’ite terror militia may seek to extricate itself by starting a war with Israel. The IDF is holding a large training exercise this very week to prepare for such a conflict, but the local residents need more time to install shelters.

A recent State Comptroller report warned that 2.6 million residents of northern Israel do not have access to functional bomb shelters. The need is most acute in the towns right along the border, where shorter range rockets cannot be stopped by the IDF’s Iron Dome batteries. These villages are desperately looking for funding to provide better protection for their communities, and the ICEJ is grateful for our friends worldwide who are enabling us to offer them these urgently-needed bomb shelters.