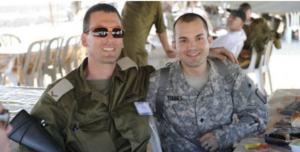 The United States and Israeli militaries are closely aligned with similar ethics policies governing their actions. Although the media often characterize Israel Defense Forces (IDF) operations as crimes, let’s take a reality check. Here are examples of context and facts which demonstrate the humanitarian bedrock of Israel’s military personnel.

In 2014, Israel conducted Operation Protective Edge, and common headlines were, “Israel Bombs Gaza.” Most news reports omitted the context that terrorists had rocketed southern Israel’s civilians for years on end, during which Israel demonstrated great restraint while almost daily her frightened citizens ran for cover from incoming rockets. Other articles with headlines such as, “Israel Kills Civilians in Gaza” made no mention that Hamas terrorists purposely hid themselves inside their own civilian population, cruelly turning them into human shields, and had used apartment buildings as weapons storage sites.

One of the best-kept secrets during the war were the protective measures taken by Israel to save the lives of civilians in Gaza. Those measures included the Israel Air Force dropping pamphlets in Gaza warning the population to take shelter before they attacked a known weapons cache or rocket launcher. Thousands of warning phone calls were also made from Israel into Gaza before attacks. After all that, Israelis also rerouted in-flight missiles if civilians were observed in harm’s way in the last few seconds. It seems Israelis were more protective of Gaza’s civilians than its Hamas terrorist government.

Accusations about Israel’s checkpoints are also skewed and lack context. Due to decades-long, deadly terror resulting in the murder of thousands of Israeli civilians in restaurants, buses, and homes, Israel is forced to maintain checkpoints and conduct searches. They don’t prefer to do this but necessity calls for it, because armed terrorists have been found hiding in ambulances and suicide bomb-belts have been hidden under Palestinian women’s burkas.

Checkpoints are certainly inconvenient for Palestinians who work inside Israel or need to travel to Israeli hospitals for treatment. Despite the challenges, however, thousands of Palestinians daily go in and out of the checkpoints to their needed destinations.

Israel’s Air Force is excoriated when it conducts targeted bombing runs into Syria, yet from the beginning of Syria’s unraveling Israeli leaders have been clear they would bomb any detected weapons transfers from Iran to Hezbollah. The weapons transfers continued unabated, and now that the war is slowing down, Hezbollah is pulling out of Syria to again focus its energy on using those weapons to destroy Israel.

An underreported yet powerful example of the IDF’s humanitarian character is the field hospital on the Syrian border where they have rescued more than 5,000 wounded Syrians who make it to safety. If the wounds are serious, the IDF transports them to Ziv Medical Center, a hospital in northern Israel. Through translators, the Syrian patients express shock, then gratitude for the skillful and kind treatment they receive. Although Israel and Syria have no peace treaty, Israelis still provide humanitarian aid when possible.

It’s useful to recall Benjamin Franklin’s quote when you are forming your opinion about Israel’s military and media coverage of its actions: “Half a truth is often a great lie.”