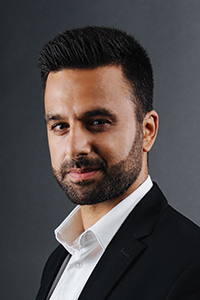 Israel has seen a breakthrough in relations with the Arab world through the Abraham Accords but also is under increasing assault by the BDS campaign for the false charge of apartheid. During a live-streamed visit to Nazareth at the ICEJ’s recent Envision Conference, ICEJ Vice President and Senior Spokesman David Parsons discussed these topics with Yoseph Haddad, an Israeli Arab Christian and reporter for i24 News who has emerged as a strong defender of Israel. Here are excerpts:

PARSONS: Can you give us a little more on your background?

HADDAD: I was born in Haifa, the biggest mixed Arab/Jewish city in Israel. At age three, my parents moved us to Nazareth. I am a Catholic … and I grew up with Jewish, Arab, Christian, and Muslim friends, some secular, some religious, the full tapestry of Israel.… We were all feeling equal, that there is no difference between Jews and Arabs, just human beings and Israelis. When you grow up like this, you eventually see the vision of how Israeli society really should be. And today, I’m trying to put that in front of extremists on both sides.

PARSONS: And then you volunteered to serve in the Israeli army?

HADDAD: Yes! Many ask why I decided to join the army, and I ask them: What does the IDF stand for? It is the Israel Defense Forces, not the Jewish Defense Forces. The IDF protects all Israeli citizens, not just Jews. And when Hamas and Hezbollah attack Israel, their missiles don’t discriminate between Arabs and Jews—they attack all Israelis.… I participated in the Second Lebanon War. Four days before the ceasefire, I was injured very badly by a Hezbollah anti-tank missile.… My foot was cut off. In the hospital, the best doctors in the world—Arab and Jewish —took care of me. And a year later my foot was reattached, and today I play football and run a lot. Every day, I praise the Lord!

PARSONS: We’re now in this time when the charge of apartheid against Israel is gaining momentum. Yet Arab countries also are reconciling with Israel via the Abraham Accords. With these two competing trends, how is it for you?

HADDAD: First, the motive of these organizations—from B’tselem to Breaking the Silence to Amnesty International—all of them are very far from being human rights organizations. In fact, they’re doing the opposite. They are hurting Israeli society, the Arabs who live in Israel, and mostly the Palestinians in the West Bank and Gaza. When Amnesty refers to Israel as an apartheid state, it shows how little they know.… Only 7 percent of the Israeli Arab population define themselves as “Palestinians.” As an Israeli Arab, I can go wherever I want, I can work in any job I want. I became a commander in the IDF over Jewish soldiers who must obey my command…. So there are problems we need to address in Israeli society. But when you categorize Israel as an apartheid state or as a state that does ethnic cleansing or genocide? In the Holocaust, the Jews went from 9 million to 3 million. That is ethnic cleansing. That is genocide. But since Israel’s independence in 1948, in every village and city, whether it’s in Gaza, the West Bank, or here in Israel, the Arab population has only increased.

PARSONS: How were the Abraham Accords received among the Israeli Arab community?

HADDAD: The only Knesset members who voted against the Abraham Accords were Arab members. Yet if you fly from Israel to Dubai, you see that 60 to 70 percent of the passengers are Israeli Arabs.

PARSONS: Have you been yet?

HADDAD: Of course! I’ve been three times and I’m going back in two weeks. I have such amazing friends there. They are more than welcoming, and they love Israeli Arabs.… This is an opportunity for me to reveal the truth about us and also for me to learn more about their Arabic traditions. We love that! And this is just another case of Arab leaders acting entirely the opposite from society. They’re behind the times.

PARSONS: I understand you also traveled to South Africa and did your own study of apartheid?

HADDAD: Yes! I visited Johannesburg and was actually confronted on live TV by the head of the BDS movement there, Muhammed Desai, and it was very hard for him to confront an Israeli Arab. In fact, I called him out for lying more than one time, and our debate went viral.… And when I spoke to the black community in South Africa, I said that comparing the Israeli-Palestinian conflict to the apartheid in South Africa is actually doing injustice to the Africans who suffered from real apartheid. And everybody just nodded their heads.

PARSONS: Okay, if people want to hear more from you, they can follow you on i24 News and YouTube?

HADDAD: Not only that, but I am doing a new show with my fiancée called “Headlines with the Haddads.” They can find it on the internet.