The Tragedy of Afghanistan 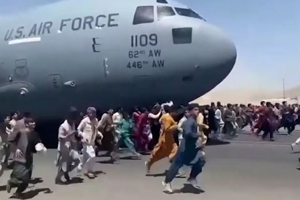 The events currently unfolding in Afghanistan are an immense tragedy – and here “tragedy” is used in its most dismal, heart-breaking sense. The sudden American surrender of the country to the Taliban is not some sad or ironic ending to a Greek play. It is an unmitigated real-life catastrophe which has millions of Afghanis once again living in utter fear of the Islamist militia’s oppressive ways and imminent revenge against anyone connected to the departing US and Western forces.

It will take time to gauge just how much of a geo-strategic and humanitarian disaster the hasty American-led exit from Afghanistan is, but no doubt it will have repercussions throughout the region and beyond. The early assessment is that this is a clear win for radical Islamist and jihadist forces everywhere, most notably Iran and its proxy militias, as well as for their patrons in Russia, China and Turkey. The losers are the US, its European and NATO allies, and especially Israel and its new Sunni Arab friends.

To evaluate the fallout from the Taliban’s astonishingly rapid re-conquest of Afghanistan, we first need to look back at the country’s long descent into war and anarchy over recent decades.

The Road to Ruin

The Soviet-Afghan War, which lasted from 1979 to 1988, already had drastic effects on Afghanistan. Lasting nine years, the conflict caused the deaths of somewhere between 500,000 and two million Afghans, and displaced about six million more people, many of whom fled to Pakistan, Iran and elsewhere. Afghan society became heavily militarized and fragmented along tribal lines, as war lords of mujahideen militias competed for control of various regions of the country.

Backed by the Pakistani military and intelligence services, the Taliban militia eventually seized power in Kabul and most of the country, and they immediately began to impose a very strict version of Islamic shari’a law. They were particularly notorious for suppressing women and destroying ancient monuments. They also gave refuge to the radical Sunni terror militia al-Qaeda and its leader, Osama bin Laden, who carried out the mass terror attacks in the United States on September 11, 2001.

When the Taliban regime refused to hand over bin Laden, the US led an invasion of Afghanistan, along with British forces. By December 2001 they had quickly routed the Taliban and installed a UN-approved government under Hamid Karzai. Since then, NATO forces have helped stabilize the country and keep the Taliban in check. There has been much development and over four million Afghan refugees have returned to their homeland. But the Taliban were never completely vanquished and the prolonged battle against them has claimed some 150,000 lives over the past 20 years.

During these last two decades, the US alone has sunk an estimated $2.3 trillion into its Afghanistan mission, including more than $80 billion invested in training and equipping the Afghan army and police forces. But they were just rolled over by the Taliban after the US forces began a rapid, surprise pull-out. In just one week, the Taliban managed to take control of Kabul and most of the country, and the result is all the violence, chaos and desperation we have seen at the Kabul airport over recent days as tens of thousands try to flee in fear. Large amounts of Western military equipment have now fallen into the hands of the Taliban, and the world is facing an August 31st deadline to get people out before they face revenge from the Islamist militia.

Lessons to be Relearned

Many of the lessons to be learned from this conflict were already there from the Soviet imbroglio in Afghanistan. To start with, Afghanistan is a large mountainous region which proved to be too tough for the Russian military, and now for the US and NATO, to hold. The terrain is rough and the tribal peoples in these mountains and valleys are fiercely independent and committed to their ancient and Islamic ways.

The population of Afghanistan also is a diverse mix of ethnic tribes, including Pashtuns (42%), Tajiks (27%), Uzbeks (9%), Hazara (9%), and others. The Taliban’s support base is among the Pashtun tribes. Recent reports indicate that most of the US-trained army and police forces came from other ethnic groups, with very few Pashtuns. That, in itself, should have been a sign to US military commanders that their reliance on these forces was hugely misplaced.

Further, the US-trained Afghan security forces were happy to receive payments for their service, but they were not willing to die for their paychecks in the face of a militia committed to a radical Islamist ideology and Pashtun patriarchal dominance.

The Fallout for Israel

The implications of the Afghan tragedy for Israel could be quite serious. As we all watched desperate Afghanis clinging to planes as they lifted off from Kabul airport, the world was reminded of the chaotic American evacuation from Saigon. But the Israeli people thought back to two similar scenarios of their own in recent decades.

First, the IDF carried out a comparable overnight withdrawal from south Lebanon in May 2000, which caught its allied forces in the South Lebanese Army by surprise. The SLA soldiers were a capable and courageous fighting force, but many fled with their families over the border into northern Israel due to the shock of Israel’s unannounced exit and the threat of reprisals from the much larger Hizbullah militia. The radical Shi’ite militia has since built up a massive arsenal of over 150,000 rockets and missiles which can now threaten all of Israel.

Secondly, after Israel’s controversial Disengagement from Gaza in August 2005, the US-trained, EU-paid Palestinian Authority security forces lost control of the Strip to the Hamas terror militia in a brief but decisive skirmish in 2007. Here, the PA forces proved as well that they were not willing to die for a paycheck when confronted by militiamen driven by a mad Islamist ideology. Hamas has since developed its own homegrown rocket-making capabilities and provoked several missile wars with Israel – the latest in May of this year.

Both Hamas and Hizbullah are backed by Iran, and herein lies the real danger for Israel. The Taliban has just won a great victory in Afghanistan which no doubt is stirring and emboldening the spirit of jihad throughout the region. No one is benefitting from this more than Iran.

The Ayatollahs in Tehran now have well-armed Islamist proxy militias encircling Israel, including in Lebanon, Syria, Iraq, Gaza and the Sinai. Iran also is now enriching uranium up to 60%, just one small step short of weapons-grade material, according to the IAEA. The UN’s atomic watchdog also just disclosed that Iran has begun the process of fashioning enriched uranium metal, yet another key move to developing nuclear warheads. Israeli Defense Minister Benny Gantz believes such moves have brought Tehran just two months away from developing the Bomb!

Given how close Iran is getting to nuclear weapons capabilities, we are now running up against Israel’s policy – or rather promise – to never allow a hostile regime in the region to acquire atomic weapons. New Israeli Prime Minister Naftali Bennett is paying his first visit to Washington this week to meet with US President Joe Biden and try to work out an agreed approach for dealing with the Iranian nuclear threat. The meeting comes just as the Afghan fiasco has many asking whether America’s allies can trust the US any longer? The answer largely depends on who is sitting in the White House, and Biden is turning out to be a thin reed to lean upon.

The timing of a weak US administration in retreat and an aggressive and emboldened Iran pressing to cross the nuclear threshold could not be worse for Israel. And the question is whether the new, untested government in Jerusalem will take the difficult decisions necessary to finally eliminate Iran’s nuclear facilities.

In a well-timed warning, even as Biden is hosting Bennett in the Oval Office, IDF Chief of Staff Lt.-Gen. Aviv Kohavi has just stated: “The progress of the Iranian nuclear program has led the IDF to accelerate its operational plans and the recently approved defense budget is earmarked for that.” Translation: Do something about Iran or we will!