The ICC’s Crime Against the Jews 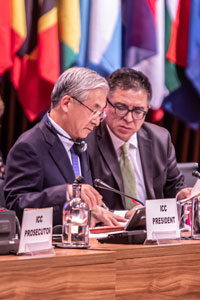 It was shocking to hear the recent news that Fatou Bensouda, the outgoing chief prosecutor of the International Criminal Court, has proceeded to open an official probe against Israel. Her decision to investigate Israel for war crimes allegedly committed in “Palestine,” including establishing of illegal West Bank settlements and violations of the law of war by the personnel of the Israeli Defense Forces during the 2014 Gaza War, is immoral, unjustified, and beyond the court’s authority. Her decision is itself a crime against the Jewish people and saddles the Court with the stigma of having initiated a modern-day blood libel against Israel.

Background of the ICC

The International Criminal Court in The Hague was established by the international community via the “Rome Statute” two decades ago to investigate and prosecute the most heinous crimes under international law, including genocide, crimes against humanity, war crimes, and the crime of aggression. It was meant as a “court of last resort,” with limited jurisdiction, trying only those atrocities referred to it by ICC member states or whenever those nations were unwilling or unable to try the perpetrators under their own judicial systems. The ICC was founded after the world witnessed horrendous acts of genocide in Rwanda and the former Yugoslavia in the 1990s. Special ad hoc tribunals were created to deal with the atrocities committed in those conflicts.

The first instance of an international criminal investigation and trial for what they referred to as the new crime of “genocide” was at the end of World War II when a group of senior Nazi officials were tried at the Nuremberg tribunal. Against this backdrop, it is completely absurd that the ICC has decided to investigate the only Jewish state for possible war crimes committed “on the territory of Palestine.” The Nazi war crimes against the Jews shocked the world’s conscience, yet now the laws and forums set up to deal with such reprehensible acts are being unjustly turned into a weapon against the Jewish state. Israel’s purported “crimes” actually consist of either acting in self-defense against deliberate Palestinian terrorist attacks targeting Israeli civilians or building Jewish homes and schools in politically disputed territories over which the Jewish people have valid legal and historical claims of their own.

The ICC chief prosecutor’s path to open her investigation was cleared in early February by a pre-trial chamber of the Court, which ruled that the Court has the jurisdiction needed to act on this matter. That narrow decision (two judges to one) is shameful, wrong, and destructive—legally, morally, and practically.

As the dissenting judge pointed out, considerable legal acrobatics were required to arrive at this biased decision—namely:

No wonder that Hungarian judge Peter Kovács, the dissenting member of the pre-trial chamber, noted that “neither the majority’s approach nor its reasoning is appropriate in answering the question before this chamber,” and “they have no legal basis in the Rome Statute, and even less so, in public international law.”

Main Flaws of the Decision

Treating Palestine as a State

First, it blurs the line between politics and law. The ICC has relied on the UN General Assembly’s political proclamations, ignoring the fact that these non-binding resolutions are of a political, not legal, nature. Clearly the Court is harming its reputation by allowing such politicization. Worse, it ignores established principles of international law when the Court decided that “Palestine” can be considered a state. Palestine does not meet the criteria for statehood laid down in the well-accepted Montevideo Convention, which requires that a state possess a permanent population, a defined territory, a government, and the capacity to conduct international relations. It should be in the interest of all the signatory governments to the Rome Statute to uphold the integrity and reputation of the Court.

Defining the Borders of Palestine

Second, in trying to answer the question to which territory its jurisdiction extends, the Court has defined the borders of Palestine, which is most certainly not its role. Moreover, in doing so, it has accepted the maximalist Palestinian territorial claims, which include all of Gaza, the West Bank, and eastern Jerusalem, without even considering Israel’s position and its well-founded claims to these disputed territories. By doing this, the Court prejudged the outcome of Israeli-Palestinian negotiations, which is the only mechanism that can settle the dispute and define the borders. Such an approach by the Court rewards Palestinian intransigence and undermines the prospects for peace. Most governments publicly support a negotiated settlement of the Israeli-Palestinian dispute, so it should be in their interests to point out that the decision goes against their long-held policy.

Third, the Court has disregarded the Oslo Accords, which stipulates that the Palestinian Authority has no jurisdiction over Israelis anywhere in the disputed territories. Therefore, even if it was considered a state party to the ICC, the Palestinian Authority cannot offer jurisdiction over Israeli citizens to the Court because it does not have any itself. By ignoring these valid Oslo commitments, the Court has jeopardized the binding nature of international agreements in general. In particular, the witnesses to the Oslo Accords (the USA, European Union, Norway and Russia) should voice their alarm at such a ruling.

Fourth, the majority on the three-judge panel chose to completely ignore the opinion of seven States Parties (Australia, Austria, Brazil, the Czech Republic, Germany, Hungary, and Uganda), which insisted that Palestine does not fulfill the criteria for statehood. Their involvement is unprecedented as they did not make their submissions in their own defense but rather weighed in on an issue that does not directly involve them. Some argue they did so because they felt it was a matter of principle. They made their submissions already a year ago, and after the flawed decision of the pre-trial chamber had been announced, they publicly repeated their original objections. These countries certainly are interested in pursuing their cause at the ICC, which they can do by bringing it to the attention of the ICC’s governing Assembly of States Parties.

At the International Christian Embassy Jerusalem, we believe it is our duty to raise our voices to defend truth and moral clarity. Though access to the ICC judges is minimal, we plan to approach the States Parties to the ICC (the 123 countries that have ratified the Rome Statute) to make clear our objections to this untenable investigation of Israel.

Geroge Orwell is quoted as saying: “Sometimes the first duty of intelligent men is the restatement of the obvious.” We cannot allow the Court’s obvious overreach to be ignored.