Why is Gaza Such a Problem? 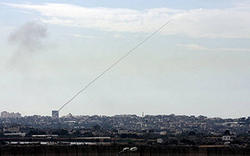 The Gaza Strip is a small piece of land along the Mediterranean coast just north of the Sinai Peninsula. It is roughly 141 square miles and has 1.8 million Palestinian inhabitants who are ethnically Arab; a majority are Sunni Muslim. While historically Gaza was a sleepy outpost of much larger empires, it has recently become an overcrowded hotbed of Islamist ideology that is destined for disaster if the West does not step in and force changes on the Hamas government—and the United Nations agency supporting it.

After the breakup of the Ottoman Empire in 1917, Gaza was part of the territory of Palestine put under British Mandate and intended to be a homeland for the Jewish people. When the British Mandate ended and the State of Israel was formed in 1948, Egypt-occupied Gaza set up an “All Palestine Government” in Gaza, headed by the notorious Nazi propagandist Haj Amin al-Husseini who formed the first jihadi militia in modern times—the Holy War Army.

The Mufti was feared and discredited by many Arab League leaders. His radical government was dissolved by Egypt in 1959 and replaced by Egyptian military rule, until 1967 when the area came under Israeli rule after the Six Day War.

After the Palestinian riots and attacks against Israel in the 1987 and 2000 Intifadas, Israel’s Prime Minister Ariel Sharon decided to unilaterally withdraw from Gaza, which he did in 2005.

The US government insisted on parliamentary elections in Gaza despite Israeli warnings about the volatile political divide in the population. The result was a victory for Hamas, which took a majority of 56 percent of the seats. Hamas is a jihadist terrorist organization that has carried out more attacks against Israeli citizens than any other group.

They immediately refused to honor any signed agreements between Israel and the Palestinians. Civil war then broke out between Hamas and the second largest faction in the Gazan government, Fatah, which is the ruling party in the West Bank. In June 2007, Hamas took control of all of Gaza, and has been accused of war crimes and violations, such as calling for genocide, directing fire at civilians, and using civilians as human shields.

Prime Minister Benjamin Netanyahu said in his statement before the Turkel Commission in September 2010: “The Gaza Strip is controlled by a murderous terrorist organization, which acts tirelessly to harm the State of Israel and its residents and which, through its violent actions directed indiscriminately at citizens—men, women, and children—violates every possible rule of international law.”

Iran funds Hamas and has given them special, longer-range rockets called Fajr-5. The Iranian rockets are able to reach major Israeli cities and pose an increasing danger for Israel.

Fifty-five percent of Gazans are refugees living in eight refugee camps. They are run by UNRWA, which has fueled the Palestinian refugee problem by treating the Palestinians differently than other refugees. Rather than resettling them, UNRWA is holding out false hopes of returning the Palestinians to their ancestral homes. Many UNRWA employees are affiliated with Hamas, and not only hide weapons in their facilities in Gaza and teach hatred for Jews in their schools, but also use the very refugees they are supposed to be helping as political pawns in a campaign against Israel.

With a jihadist government, Iranian agitation, and a co-opted UN agency, the situation in Gaza is dire. No one seems to care that there is a forty percent unemployment rate causing thirty-eight percent of Gazans to live below the poverty line.

Living conditions are worsening due to the rapidly increasing population (the area’s growth rate is one of the highest in the world) and inadequate water, sewage, and electrical services. It is no surprise that at least 70 percent of Gazans want to leave Gaza for good.

There are no quick solutions for the Gaza Strip. But there are two things the Western leaders need to begin tackling right away. One is to dismantle UNRWA over a five-year period and use the funds for resettling the refugees. The other is to remove Hamas from power and put a civil government in place that actually cares about the people living there and will live in peace with Israel. For the sake of the $1.8 million Gazans living this nightmare, someone needs to step in.