Outpouring of the Holy Spirit in Caesarea

The beginning of our story as gentiles 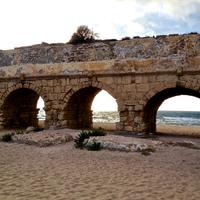 The city of Caesarea is mentioned a number of times in the New Testament. It is the setting of several critical events recorded in the book of Acts including the Roman Centurion Cornelius’ receiving of the Holy Spirit. This watershed moment in the history of Christianity took place not in the holy city of Jerusalem but in the pagan city of Caesarea.

Setting in a Pagan City

Known as Caesarea Maritima, or “Caesarea on the Sea”—to differentiate it from Caesarea Philippi in the northern part of Israel and also mentioned in Acts—this expansive port city on the Mediterranean Sea was built by King Herod. Named in honor of Roman Emperor Caesar Augustus, Caesarea Maritima contained a prominent temple to the emperor that stood some 100 feet high.

King Herod was known as Herod the Great due to his large and ambitious building projects such as Masada, the Herodium, and the temple in Jerusalem—a portion of which remains today as the Western Wall. He made Caesarea one of the largest cities in the Roman Empire, and the provincial capital for some 500 years.

Herod built Caesarea’s expansive harbor using cutting-edge technology that allowed concrete to harden under water. He then built a ten-mile-long aqueduct to transport fresh water from springs at the base of Mount Carmel. In order for the water to flow by the pull of gravity, the aqueduct was built on arches and the gradient carefully measured. Herod’s summer palace was designed to jut out into the sea with an Olympic-size pool of fresh water. A Hippodrome (a stadium for horse and chariot racing) that could seat 20,000 people paralleled the beach.

He also constructed a theater with a seating capacity of 3,500. According to the Jewish historian Josephus, this was where Herod’s grandson, King Herod Agrippa I, died. As recounted in Acts 12, Agrippa was sitting on his throne and addressing the people when they proclaimed him to be a god. Because he did not rebuke them and direct their praise to God, he was struck down by an angel and died.

Visitors to Caesarea today can sit amongst the ruins of these magnificent structures and imagine the lifestyle of the Roman people in Herod’s day. We can also review the biblical story of the Roman Centurion, Cornelius.

In this opulent city of extravagance and excesses, rife with pagan worship of emperors and mythical gods, lived a Roman Centurion named Cornelius. He was a “devout man and one who feared God with all his household, who gave alms generously to the people, and prayed to God always” (Acts 10:2). Hence, he had a “good reputation among all the nation of the Jews” (10:22).

This Roman Centurion, a gentile of the Italian Regiment, feared and prayed to the God of the Jews and gave alms according to the Jewish practice. Cornelius, therefore, was held in good standing with the Jewish people. It was this particular man God chose to be the first gentile blessed with salvation and the gift of the Holy Spirit.

This choice was explained by an angel who appeared to Cornelius and said his prayers and alms had come before God. Cornelius’ prayers to the God of Israel and his generosity toward the Jewish people had captured God’s attention, and he was top of the list when the God of Israel was ready to reach the gentile world.

The lesson here is a simple one: when God established His covenant with the Jewish people through Abraham, He promised to bless those who blessed them. Cornelius was doing just that and in return, he was blessed. His entire family received the Lord and was baptized that day, and he has gone down in history as the first gentile to receive the Holy Spirit.

The Beginning of Our Story

Up until this time, the gospel of Christ’s death for the remission of sins had only been preached amongst His Jewish brethren. While the Hebrew prophets foretold of a day when the gentiles would worship the God of Israel, these first-century Jewish believers in Jesus were not expecting it to begin in their lifetime.

Peter immediately went to Jerusalem where he had to convince church leaders that the Holy Spirit was falling on people outside of the nation of Israel and outside of the Jewish faith. From the pagan city of Caesarea word came to the apostles and believers in Jesus that God had “also granted to the Gentiles repentance to life” (Acts 11:18).

Gentiles were “strangers and aliens” from the “covenants of promise,” but had been “brought near by the blood of Christ” (Ephesians 2:12–13). The price was paid for all people on the cross, but when it was time for the Holy Spirit to break into the gentile world, it began in the pagan city of Caesarea, in the home of a Roman Centurion who prayed to the God of the Jews.