How God Saved the Jewish People 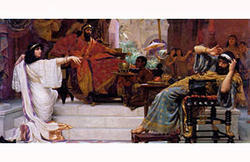 Israel’s Prime Minister, Benjamin Netanyahu, placed his reputation and political career on the line to warn the U.S. Congress of the dangers of a nuclear Iran. His historic speech on March 3rd just happened to take place one day before the start of the Jewish holiday of Purim. The meaning of this was clear to many Christians and Jews, that history had come full circle, and Netanyahu stood as an Esther, pleading with the leaders of the United States to stop this evil Haman, in ancient Persia, and his plans to annihilate Israel.

The Jewish people have at various times faced threats so serious they were considered “existential”—a threat to their very existence. For example, the Jews of Europe are now questioning their future on the continent due to rising anti-Semitism, and many scholars are proclaiming there is no future for Jews there anymore.

They are now joining a long list of persecuted Jewish communities who, over the last 150 years, have been forced to abandon centuries of historic ties in other lands, and return to their ancient homeland where they could at least defend themselves and secure their own future. As a result, the largest Jewish community in the world now resides in Israel, but faces a very serious existential threat of its own from Iran.

Modern day Hamans in Iran—ancient Persia– are devising an evil plot to annihilate Israel while building the nuclear and conventional weapons capable of doing so. One cannot help but see the eerie parallels between this current situation and the story in the book of Esther, in which the largest Jewish community of her time was also under a threat of annihilation.

As Jews around the world are reading the book of Esther this month, and celebrating the miraculous Purim story, it is a good time to apply some key elements of the story to our day.

The Seriousness of the Plot

There have been a number of Hamans throughout history who have threatened and even attempted the annihilation of the Jewish people. One would have to concede that Adolf Hitler was a perfect example of a modern Haman.

The seriousness of the threat in the book of Esther was amplified by the fact that the bulk of the Jews of that day lived in the Persian Empire. If Haman had succeeded in killing the Jews of Persia, it would have ended the existence of the Jewish people altogether. There would have been no one to later return and rebuild Jerusalem such as we read about in the book of Nehemiah.

There would have been no Jewish people left to birth the Messiah, Jesus, who came in fulfillment of God’s promises to their fathers. God’s plan would have failed and it would have been all over. For this reason, we should all be celebrating the miraculous deliverance of the Jews of Persia along with our Jewish friends during Purim this month.
The fact that today’s Haman is found in the very same geographic location as the first one – ancient Persia—does give one pause. History seems to have come full circle and that in itself should have our full attention.

God is never mentioned in the book of Esther, yet His hand can be seen busy at work in many elements of the story. Most notably is the way He used the courageous Jewish girl, Hadassah, who became Queen Esther. She risked her life to go before the King and uncover the plot of Haman, a man who was so powerful the people of Persia had to bow down to him and pay homage. She knew that if her plan failed, it would not only mean her death, but that of her people.

However, the King accepted her request for an audience, and granted her anything she asked. Esther was then faced with a grave dilemma: how to stop the execution of Haman’s plan. Haman had issued the royal decree, sealed with the King’s signet ring, that in all provinces of the Persian Empire, from India to Ethiopia, the Jews were to be killed on a specific day. The King’s royal decree was law and could not be rescinded.

The Right of Self Defense

There was no changing the fact that the Jewish people were going to be attacked, so a new royal decree was issued giving them the right of self-defense. And that is how the Jewish people survived the plan of Haman. They fought back.

Today, the people of Israel have also been granted the right of self-defense when they established a state and were accepted into the United Nations in 1948. While Israel is pleading with the United States, and indeed the international community, to place enough pressure on Iran to make them give up their evil plan, it increasingly seems as if, once again, the Jewish people’s only recourse will be that of self-defense.

Esther was not the only heroin of the story; in fact, Mordecai was just as essential to God’s plan. It was Mordecai, a good loyal citizen, who uncovered a plot against the King and saved the empire. He seemed to be a man of intelligence who had discernment and his “ear to the ground.”

He wisely counseled his niece, Hadassah, not to reveal her Jewishness in the competition to be Queen. And it was Mordecai who alerted Queen Esther to Haman’s plan and pleaded with her not to consider her own life, but that of her people. At the end of the story, Mordecai was elevated to Haman’s previous position and given authority to use the King’s seal. It was Mordecai who issued the royal decree granting the right of self-defense to the Jews of Persia.

– by Susan Michael, ICEJ US Director, creator of Israel Answers, and the American Christian Leaders for Israel (ACLI) network