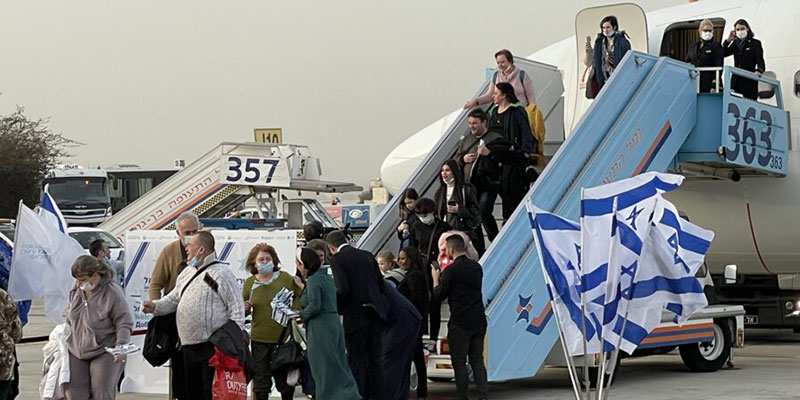 Here at the ICEJ we are preparing to assist with an amazing surge of Aliyah this fall, as Jewish immigrants from many FSU countries look to make Israel their new home.

With winter fast approaching, and the war in Ukraine still at a very critical stage, we must be ready to provide help and support as required. ICEJ Aliyah Director, Howard Flower, said, “I have been in the FSU for more than 30 years and have experienced many up and downs, but this crisis is the most horrific thing I have witnessed.”

As Ukrainians continue to hold on, amidst plummeting temperatures, electricity shortages, and a lack of food, many Jewish people are deciding that it is too much to bear and look for a way out. Those that can, may take the option to be transported across the Ukraine to a neighboring Eastern European country, like Poland, Moldova, or Romania, and from there, to Israel.

This is where we, the ICEJ and its donors, can help. A suggested gift per Oleh (new immigrant) of $1,000 could help flights, ground transportation, and hotel accommodation as the paperwork is completed. Once in Israel, additional urgent assistance will be needed for integration programs as the immigrants settle into life in the land.

Much has been made recently of the more than 10,000 Jewish immigrants moving to Germany. This preference, to go to a European nation instead of making Aliyah to Israel, may be due to the preferential status they are given there. Even so, given Germany’s recent alarming antisemitism reports and the fact that Jewish immigration from Germany is up by 26%, it is clear that the situation is still very dynamic.

ICEJ is supporting Aliyah promotion and preparation in Germany.

Current statistics speak volumes concerning the ongoing plight of a war-torn Ukrainian people. There is an increase of 533%, over this same period, last year, of the many Jewish immigrants choosing Aliyah to Israel, as a way of escape and refuge.

The Ukraine Jewish population is not alone in looking to leave, as Russia’s Jews are also showing an unprecedented increase in Aliyah of 427% over the same period, and from all Former Soviet Union countries, 401%. Numbers like these have not been seen in over 20 years.

Once again, we need to be poised and ready when flights from Ethiopia resume in the coming weeks as well. Some 1,500 Jewish immigrants are expected soon, about the same number that have arrived in Israel, all year!

In 2022, due to the generosity of our donors, the ICEJ has assisted, so far, more than 3,500 immigrants on their way home.

We are so thankful to God for allowing us to be a small part of His plan to gather those scattered from the four corners of the world. Consider partnering with the ICEJ in its ongoing efforts to bring comfort, love, and support to those returning to Israel, the Land of their forefathers.

Highlights of Feast 2022 – The Land of Promise

Inside Lana’s Arduous Journey to Israel