How the War in Ukraine is Impacting our Haifa Home

The TV is full of images of women, children, and the elderly in Ukraine fleeing their homes with only a small suitcase of belongings. This is making a huge impact on our residents at the ICEJ’s Haifa Home for Holocaust Survivors. Many are reliving what they experienced as children in the Shoah (Holocaust).

For Chaya Caspi, watching the news from Ukraine stirs up disturbing memories from her past. To this day, Chaya regularly relives a certain 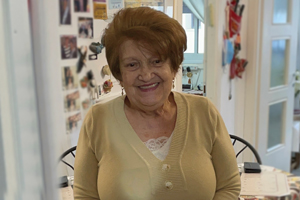 unimaginable pain of Nazi cruelty, and she feels great compassion for people in Ukraine.

“I feel a deep pain in my heart when I think of Ukraine. The war is not face-to-face, so there are many civilian casualties. Families have been ripped apart. Innocent women and children have been killed by Putin’s bombs,” said Chaya.

Chaya was born in Romania and was eight when World War II started. When the Nazis came, any man over the age of fifteen years was rounded up and shot. Chaya’s 19-year-old brother was among them. Chaya’s father and younger brothers were later rounded up and crammed into cattle cars. He and his younger sons were on the train for eight days without food or water. At the end of the journey, the doors opened, and all the dead were tossed out. Chaya’s youngest brother died on that train. His father miraculously survived the war as a slave laborer and was eventually reunited with his remaining family.

Another Survivor, Esti, was born in Poland. Her father was killed when the Germans arrived and burned her village. Esti, her mother, and her sisters fled to the forests for nine long months. They built small shelters and made blankets from leaves. One day, German soldiers walked into the forest and started shooting. Her mother and two sisters were killed right next to her. Esti and her other sister somehow managed to escape.

When Esti hears about Ukraine, tears well up in her eyes. It reminds her of the time when Ukrainians helped the Germans kill Jews.

“But today’s Ukrainians have nothing to do with the old generations. It’s the same with the Germans. I love all the volunteers from Germany who care for me today. They’re not guilty,” Esti insists.

She feels sad that Ukrainians are going through similar things that she had to endure, like being forced to suddenly pack up belongings and then be uprooted—and see dear family members murdered “However,” Esti says, “I’m glad that the Ukrainians receive so much help and refuge from around the world. Back then, no one wanted to help us because we were Jews.”

We are working with our partner organization to rescue Holocaust Survivors from Ukraine and are preparing rooms here in Haifa to take in several of these Survivors. When Ukrainian Survivors arrive in Israel, they will first be cared for by the Jewish Agency. We will meet with them during this time to see who are a good fit for the Haifa Home.

In the meantime, after overcoming several hurdles, the elevator is finally being installed in our newest apartment building, which may be the ideal place to house some of these Ukrainian Survivors. It is almost too much to fathom what these people went through as children and are now going through late in life. The Christian Embassy wants to do all that we can to comfort and support these future residents.

March was a difficult month at the Haifa Home, as three of our dear residents passed away. May the memory of Zvi Cohen (90), Klara Berkovitz (90), and Edmond Bozaglo (82) be blessed. 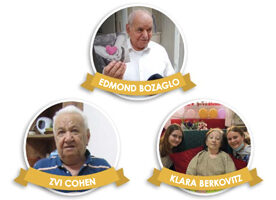 Please show your love toward them by supporting the ICEJ’s Haifa Home.