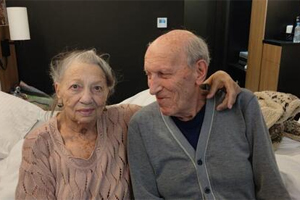 Not only did Arnold Botkin and his wife Alla survive the atrocities of World War II, but in recent times, they were hunkered down in their little apartment in Kharkov, Ukraine, trying to survive as buildings around them were being shelled.

After the Nazis occupation of the city in 1941, Arnold’s Jewish family escaped from the city, while Alla’s family remained in the occupation, and she spent her childhood years hiding in a basement.

Being a young boy during the war, Arnold does not remember the war too well, but recalls returning to a destroyed city. “It’s not easy to see it in rubble again, but life must go on,” said Arnold.

“In the first weeks of the Russian invasion, we did not even think about leaving,” shared Arnold. “I thought we could somehow survive it.”

However, with each passing day, the situation grew worse. Arnold recalls how they hardly left their home due to the constant shelling in their city, and how their local grocery store came under fire twice but managed to carry on working.

One day their apartment building took a direct hit from a rocket. The explosion which occurred on the first floor, shattered all the windows of their fourth-floor apartment. “There was shrapnel on the floor, and it was very cold in the apartment” explains Arnold.

Yet, amid the shelling, Arnold and Alla miraculously remained unharmed.

When their niece left town, she gave them some food supplies, which the couple kept in their apartment. However, the challenge was obtaining medication. The pharmacies were only operating sporadically, resulting in long queues. They were grateful that relatives living in other cities were able to help them by shipping medication.

War savagely takes the lives of people. During another shelling near their home, two people lost their lives. “The explosion was so strong that my wife screamed in panic for a long time,” explained Arnold. It was only then that they seriously considered evacuating.

Despite the threat to their lives, the decision to leave their country was not an easy one. Being married for 58 years, they hold a lifetime of memories of their home close to their hearts. “We are attached to our home, our city. Our parents and my older brother are buried there, and we got used to our way of life.”

At 83-years-old, the thought of starting life again in a new country and adapting to cultural differences is daunting. However, the decision to evacuate and immigrate to Israel finally came after the loss of electricity and communications to their area and there was no longer water and gas.

Under the relentless aggression, it was extremely challenging to take this elderly couple to safety. The situation was further complicated by serious health problems; Alla could not leave the house on her own and needed a medical evacuation by ambulance. All efforts were given to a special operation to rescue these 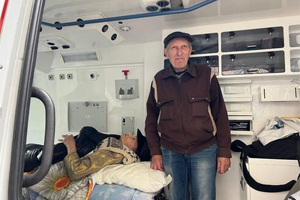 The ambulance was allowed to drive through checkpoints. On this challenging journey, they encountered destroyed roads, which created difficulty in reaching the Polish border. “The driver prayed all the time that we would get there safely,” shared Arnold.

Along the way, they passed military preparations in various parts of the country, where they saw digging of trenches and sandbags packed as defense mechanisms.

Finally reaching Warsaw, Arnold and Alla were met by the Jewish Agency and preparations got underway for their Aliyah to Israel.

Arriving in Israel, the ICEJ’s Home for Holocaust survivors welcomed them with open arms! Arnold and Alla are now settling into their new home. They are being taken care of in a safe and loving environment and having all their needs met.

Their daughter and her husband also fled Ukraine and made Aliyah to Israel a few weeks prior to Arnold and Alla’s arrival. A place was provided for them to live within close proximity to their parents, so that they can be together to help take care of them.

Your support of the Haifa Home ensures these Holocaust Survivors will enjoy a good quality of life in their remaining years.