Recently, the ICEJ AID team visited Netanya, where over the past two months more than 1000 Jewish immigrants from Ukraine, Russia and Belarus were placed.

Forced to flee from their war-torn country, these new immigrants arrived in Israel with only suitcases—filled with a few essential personal belongings.

For many, their new life in Israel is filled with mixed emotions, as hope and apprehension are mingled together. Hope for a brighter future, yet weary of what lies ahead as they begin to settle and adjust to a new culture, learn the Hebrew language, and begin to integrate into Israeli society.

These new immigrants had been in a hotel for one month after their arrival. During this time, the Israeli Ministry of Aliyah and Absorption’s welfare department helped them settle in and find an apartment.

ICEJ AID assistant Jannie Tolhoek met with three Ukrainian single-mother families in Netanya, giving them encouragement for their future, plus gift vouchers, towels and toiletries as a welcome gift. 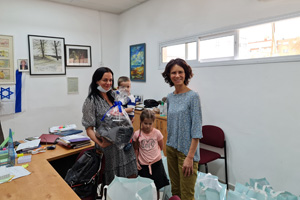 “We travelled a long journey from Odessa to Moldova and then on to Israel. It took nine days and was filled with fear, hardly any sleep and we were always cold” explained Valeria.

Jannie observed Valeria’s strength as she watched her children while explaining that her husband is in the Ukrainian army and her parents are still in Odessa. Valeria was so thankful for the gifts, as they had just acquired an apartment and would soon be moving into it empty.

Jannie also met with Tatjana and her daughter Vlada, who is 19 years old. They arrived from Sumi, close to Kharkov. They explained how on the day they left Sumi, the Russian army invaded their town. They travelled a tumultuous journey of 50 hours by car and train to reach the border of Poland, not having any food or sleep along the way. They were exhausted but so happy to reach the Polish border, where the Jewish Agency greeted them. Jannie also discovered that Vlada is a law student.

“She was studying at the university to become a lawyer and had to leave all her friends behind. Being uprooted like this was extremely difficult for her, especially considering that she now must learn the Hebrew language before she is able to continue with her studies” explained Jannie. “Their whole life is turned upside down, but they are both so thankful to be in a safe country. They are hoping to have their husband and father join them as soon as the war is over.”

Their gratitude for their welcome package was evident by the huge smiles that suddenly beamed across their faces as they realized that they are cared for and remembered. They also are hoping to settle in Netanya.

Meanwhile, Jannie’s conversation with Irina and her twin daughters, Lila and Nika (10 years old), revealed that Irina is a doctor, and she was so grateful to get connected with an organization of doctors in Israel. 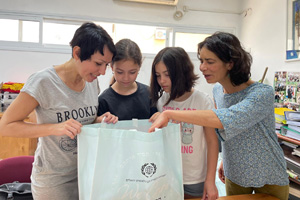 “Israel is a beautiful country, and the people are all trying to help us so much. Even though it has been a very tough journey to come here and leave my husband and parents behind, yet we are safe now and we have received lots of help. Thank you so much for taking care of us and for helping us get established in Israel. The girls have been through so much trauma and have seen too many horrors already in their young lives. At least now we can live quietly and start to rebuild our lives, find a place to live, and learn Hebrew. Thank you once again for your gift. This helps so much as the girls will need summer shoes soon and now, we can buy it. Spasiba! (Thank you!)” expressed Irina.

The ICEJ’s AID team also recently visited a hotel in Jerusalem where many Ukrainian families have been staying. There, they distributed toys and games to 47 very excited children. 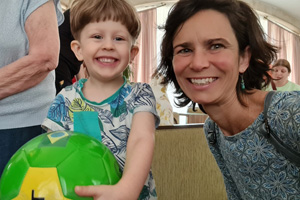 “Upon entering the hotel lobby with our bags, the children were dancing around us with excitement and following us to the place where the distribution could take place. They had been waiting so patiently to receive their gift, yet the trauma of the war was visible on their faces” remarked Jannie.

The adults present were mothers and some grandmothers, as again most of the men were left behind in Ukraine. Jannie explained how their gifts were given by Christians around the world who love and support them.

The children could not wait to open their gifts, and immediately began playing with the balls and dolls. The children held the coloring pencils closely to their chest as if to embrace the box and very soon they were being put to good use as well.

“Some of the children came to me to say ‘spasiba’ and ‘toda raba’ (thank you very much!), using the few Hebrew words they had learned. These children left everything behind, including their fathers. It is such a joy to see that we can bring smiles to their little faces” shared Jannie. It is only through your generous giving that it is possible for the ICEJ to bring smiles back to the faces of these Ukrainian Jewish single-mothers and their families who have left behind everything, including their husbands and fathers. Thank you for supporting our urgent Ukrainian Aliyah efforts.

Please join us in rescuing more Holocaust Survivors and other Ukrainian Jews from the clutches of this brutal conflict.