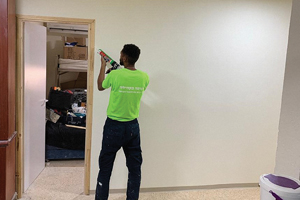 The Christian Embassy is reaching out to many Israelis in desperate need due to unemployment, financial hardship, depression, or aging. One project we support repairs homes for Israeli families living in poverty.

When 91-year-old Holocaust Survivor Yaacov, reached out to an Israeli social welfare worker, his living conditions were utterly inhumane. The skilled renovation team was not prepared for what they saw: the walls were coated with dirt, there was no shower, the doors and windows were broken, and there were cobwebs everywhere.

Yaacov lost his entire family in Auschwitz, and he has lived alone his whole life. As he grew older, it became harder to care for himself, but he didn’t know help was available and continued living in dreadful conditions.

The renovation team began scrubbing and gutting Yaacov’s apartment. The repairs took a full month and included a new kitchen, bathroom and shower, water heater, flooring, and windows and doors, plus fresh paint on the walls. Not only did Yaacov receive a new home, his hope and dignity were restored. 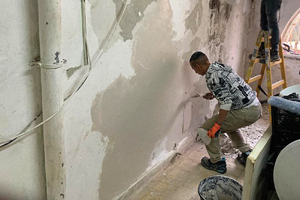 “It is heartbreaking to see the extent of repairs needed in some of the homes,” noted Nicole Yoder, ICEJ Vice President for AID and Aliyah. “The renovation team is amazing, though! They work with such kindness, in coordination with the social workers, to get the renovations done as quickly as possible.”

The renovation team repaired another home for a family of six living in severe poverty in a tiny two-room Jerusalem apartment. The parents had enclosed a small balcony to create a bedroom for their four children. But the room was stifling hot in summer and freezing cold in winter, the walls became moldy, and the children soon became ill. Because of the poor living conditions, the children could not invite friends over.

The team stripped the moldy walls, then sanitized the apartment and built a new dividing wall in the living room to create a proper bedroom for the children. As a result, the family now enjoys a clean living space, and the children have a safe place to sleep and can now invite friends over after school.

The renovation team entered another apartment of an elderly couple in Jerusalem. The wife uses a wheelchair, and the husband suffers from a heart condition. They were physically unable to fix their home, which was poorly lit and had become dilapidated and hazardous—broken and missing floor tiles increased the risk of falling and injury. The renovation team started by painting the walls, which instantly brightened the apartment. They also replaced light fixtures and retiled the floors. Next, the team affixed grab bars and railings to the walls. The overjoyed couple now feels safe in their home and promptly wrote a letter of thanks stating: “You made our home into a palace.”

You can help families like these living below the poverty line.