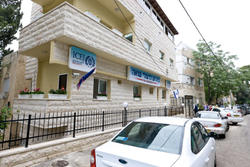 It can be extremely traumatic to pack up a home, downscale dearest possessions, and leave most memories behind—especially when it might be the last move.

For Holocaust Survivor Yaacov Grossman, however, his decision to move was a choice that he could make for himself, unlike during the war years when he was forced to move from his home in Poland to far-away Siberia.

As a young boy, Yaacov’s family owned a clothing factory in Poland. When he was five years old, the Germans invaded his hometown and threw his family out of their home. Soon the men of the city were led out of town, and Yaacov, along with his father and three brothers, found themselves traveling through Eastern Europe to Ukraine. Meanwhile, his mother and sister remained behind in Poland, with his mother left to run the family business.

While in Ukraine, the Russians told his father that they should register if they wanted to return to Poland. Instead of returning, they were taken during the night to Siberia, where life was extremely difficult: they had nothing to eat, and they suffered from hunger, illness, and the freezing cold weather. Little Yaacov and his brothers were left alone during the day while their father worked doing forced labor.

Yaacov’s father tried to grow vegetables, but this was hardly sufficient to sustain them. Yaacov remembers sitting outside in the harsh winter, as no one wanted to let a father with four boys into their home. Eventually, a farmer showed pity and allowed them to live in his cowshed until they acquired a single room that they all cramped into.

After the war ended, they returned to Poland in 1946 to discover that his mother had fallen ill and died during one of the infamous death marches.

Unfortunately, Yaacov could not remain in Poland and ended up traveling from place to place, eventually ending up in an orphanage in Germany. “It is almost impossible to describe the nightmare we went through all these years,” says Yaacov.

Finally, in 1949 he traveled together with his father to Israel. Later in years, Yaacov became a shoemaker and acquired a little store, while his father was a cook working in a children’s home.

Knowing that a chapter of his life is ending and a new beginning, Yaacov said: “The question is only how much time, how many years I will still enjoy living here?”

In this next season of his life, Yaacov will be comfortable and cared for by the dedicated ICEJ team of Christian volunteers serving at the Haifa Home, Israel’s only assisted-living community dedicated to caring for Holocaust Survivors in need. In addition, he will be able to befriend other Survivors residing at the facility and enjoy all the social interactions and activities provided there.

Your continued support of the Haifa Home ensures that these Holocaust Survivors will enjoy a good quality of life for their remaining years.