Why Does The United Nations Single Out Israel 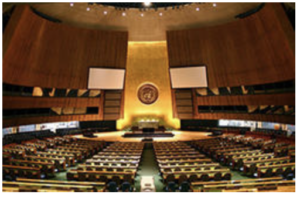 The United Nations charter of June 26, 1945, reflected lofty goals to help nations recover after WWII and set a course of peace for the future. The U.N. Security Council was specifically created to negotiate and maintain peace around the world. However, the UN currently seems to be preoccupied with the Palestinian issue, while ignoring genocide and gross human rights violations by a number of countries.

Increase in Number of Member States

In the ensuing years after WWII, the United States exercised considerable influence over the 50 odd member states. But, new nations came into being across the Middle East and in Africa. The United Nations member states grew from 51 to the current 193. While the US still holds significant weight, there are many other alliances among members that are also highly influential.

Alliances and Demographics of Member States

The sheer growth in numbers is not the major problem though. The alliances and demographics of those member states is. For example, the Non Aligned Movement (NAM), whose original purpose was within the context of the Cold War, now has 120 member nations who control every corner of the UN except for the UN Security Council. NAM is an umbrella for the Organization of Islamic Cooperation (OIC). Fifty-Seven member states are affiliated with the OIC and twenty-two of those states are members of the Arab League. This is a significant voting bloc in the UN.

For this reason, the historic UN General Assembly resolution on November 29, 1947–the United Nations Partition Plan–which paved the way for the creation of the modern State of Israel, would not pass in today’s UN due to the OIC voting bloc. In 1947, thirty-three nations voted YES, thirteen NO, and ten nations abstained. The next year on May 14, 1948 when Israel declared its independence, the new Jewish State was accepted into the UN with a majority vote of 33 nations voting YES. The OIC voting block today is significantly larger.

The scales have tipped towards a demonstrable coalition in the UN that defames Israel at every opportunity. The only democracy in the Middle East, with enshrined principles protecting and promoting religious freedom, humanitarian outreach, freedom, innovation, and pluralism, is routinely singled out by the UN Human Rights Council at the expense of other crises around the globe.

— by Susan Michael, US Director