Taking Israel Out Of The Bible 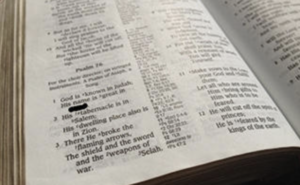 For example, a special verse that brings comfort to a person who may be experiencing difficulty is Isaiah 49:16 “See, I have inscribed you [insert name] on the palms of My hands.” This verse lets the believer know that they are known by the Lord, and He holds them before Him, as it were, in the palms of His hands. It is a beautiful verse.

It may be a great surprise to many to learn that the verse is originally intended for Jerusalem, the city that personifies the people of Israel, for verse 17 goes on to say “Your walls are continually before Me.” So an over personalization of the scriptures can actually result in a Christian who can recite verses from their Bible but has failed to understand what the book is about.

Getting the “Big Picture”

Another tendency in Bible study is to study by topic or book, which is understandable for such an immense book as the Bible. The danger, however, is walking away from a Bible study understanding everything there is to know about a particular topic, but not knowing the overall story of the Bible itself.

The Bible is the story of God’s love for the world, His plan to redeem that world, and the battle against that plan. The object of God’s love was always the world, and He chose Abraham to birth a nation through which He would carry out His plan to redeem that world. This is the overarching story that the Bible tells, and central to the story is the calling on the nation of Israel.

The Bible is, in fact, a Jewish book: written by, about, and largely for, Jews. Jesus even said that salvation is of the Jews! Christians are partakers of that salvation, and are able to apply the scriptures to their own lives, because they are the heirs of Abraham by faith. Through Jesus they are adopted into the family and are part of Abraham’s family tree. But, they do not replace the original family they are grafted into, nor do they annul God’s promises to them.

Some Christians have tried to claim that the Old Testament should no longer be read literally about the people of Israel; it now only applies spiritually to the Church. This is known as Replacement Theology: the Church has replaced Israel in the plans and purposes of God. This spiritualization of scripture is actually a rejection of scripture by rewriting it to mean something other than its original meaning.

While some Replacement Theologians would deny rejecting or rewriting scripture, others are quite blatant about it. One such group is Sabeel. Founded by Palestinian Anglican Canon Naim Ateek, Sabeel propagates Palestinian Liberation Theology and disregards any portion of scripture that disagrees with Ateek’s anti-Semitic views. He calls for scripture to be “de-Zionized” by removing all “Zionist” portions that afford any significance to the nation of Israel and any connection of the Jewish people to the Holy Land.

While that may sound ludicrous to most, Sabeel has the ear of some mainline denominations  resulting in resolutions to divest from companies doing business with Israel as well as anti-Semitic study guides.  One denomination published a study guide, in which Sabeel authored a chapter, that was so imbalanced and malicious that some Jewish groups called it “hate speech.” The guide ended with a group exercise suggesting that liturgy and hymns be edited so to avoid words like Israel, Zion, exile, covenant, and return, as they might cause worshippers to confuse these biblical terms with modern events and people in the Holy Land.

Interesting, that all of this textual manipulation is with one intent in mind: rid scripture of the role of the nation of Israel. This, in complete contradiction to the words of the Apostle Paul who, speaking specifically of the Jewish people, said in Romans 11:29, “For the gifts and the calling of God are irrevocable.”

The problem is, of course, that if you want to remove Israel from the Bible, you will have little Bible left. Christianity then loses its spiritual roots, churches lose their moral authority, and their membership numbers dwindle. It is an important lesson for all churches.

Susan Michael is the US Director of the ICEJ and creator of www.IsraelAnswers.com.

They Are Still His People (Week 24)

God Will Judge Every Deed (Week 22)

The Wisest Man on Earth Becomes a Fool (Week 21)