Finding Hope In The Faithfulness Of God 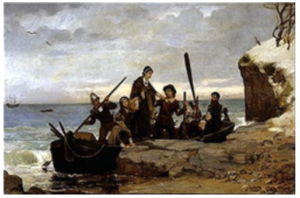 There are times in the lives of all believers when they may face doubts and discouragement. No matter what the reason for one’s disappointment, the Bible offers guidance as well as examples of others who have experienced the same. But today, we can find considerable encouragement not just in the biblical stories of the Israelites of old, but in the story of God’s faithfulness to His people throughout history, even up until today.

The Faith of Our Fathers

The Puritans were so encouraged by the story of the ancient Israelites that they took from it direction for themselves. They yearned for freedom from their “bondage” of persecution at the hands of the corrupt state church, just as the ancient Israelites had been freed from slavery in Egypt. So, the Puritans crossed their “Red Sea,” which was the Atlantic Ocean, and arrived on the shores of their “Promised Land,” upon which they founded a nation built on religious freedom.

Later, the African slaves in America also found great comfort in the Bible stories as they saw parallels to their own experiences. They felt their enslavement was much like that of the Hebrews in Egypt, and their exile and captivity like that of the Jews in Babylon. Therefore, the stories of Daniel and Moses gave them great hope of deliverance so they sang songs like “Didn’t my Lord deliver Daniel” and “Go Down Moses.” Their hope of freedom was expressed in the black spiritual “Pharaoh’s Army Got Drowned.”

A God’s Faithfulness to Abraham

The 11th chapter of Hebrews highlights various biblical characters who believed God and acted accordingly, and it has brought encouragement to believers for generations. The Apostle Paul urged the discouraged believers of the early church to learn from their fathers who, with faith and patience, inherited the promises (Hebrews 6:11-12). He then specifically pointed to Abraham as an example of one who patiently endured until he obtained the promise.

Paul’s message is clear – God is a faithful God. Just as He fulfilled His promises to Abraham, we can trust Him to fulfill His promises to us. We receive strength and courage from the stories of those who went before us and who patiently endured in faith before they saw the promises fulfilled.

But let’s take a closer look at Abraham. While Abraham did live to see the fulfillment of God’s promise of offspring, other promises had not yet been fulfilled when he died. For one thing, Abraham lived as a foreigner on the land God promised him. It did not become the “possession” of His descendants until some five hundred years after his death.

God had also promised Abraham that through him all the families of the earth would be blessed. That fulfillment only took place some 1,500 years later when the atoning death of Jesus purchased salvation for every person who would receive it.

God is still fulfilling His promises to the descendants of Abraham, Isaac, and Jacob; and that realization should bring great encouragement to all of us. For, just as God promised Abraham that his descendants’ possession of the Promised Land was forever (Genesis 17:8), He later explained that their right to live on the land was based on their relationship with Him (Deuteronomy 29:24-28). It is truly a holy land for a holy people.

If they sinned, their sin would be punished with exile; they would be removed from the land God had given them. But God always promised a return to their land, and the spiritual restoration of His people. Psalm 89 confirms that although He would punish their sin, His lovingkindness would never be withheld, nor would His faithfulness ever fail. “My covenant I will not break, Nor alter the word that has gone out of My lips” (vs. 34). Israel’s promised inheritance and restored relationship with God was a sure thing.

Christians should find great comfort in knowing that although God allows His children to suffer the consequences of sin, using that time to teach us and correct our ways, that we can have an expectant hope of return to His presence and His goodness in our lives!

So, in times of discouragement and doubt, remember the return of the Jewish people to the land God promised to Abraham, exactly as foretold by the Hebrew prophets thousands of years ago. We can find hope in this amazing demonstration of the faithfulness of God.