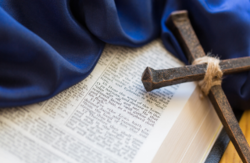 Many Evangelical Christians will argue that there is no such thing as “Christian anti-Semitism.” For them, it is a contradiction of terms—an oxymoron. They do not believe a “true” Christian can be anti-Semitic. Unfortunately, history has proven otherwise.

Jews and Christians have had a history of contentious relations. What started in the first century as an internal squabble among Jews over the messiahship of Jesus became a split into two separate religions, both struggling to differentiate from the other and survive under brutal Roman rule. Once Christianity became the official state religion of the Roman Empire in the fourth century, anti-Jewish theology paved the way for degrading laws and state-sanctioned persecutions, ghettos, and expulsions.

What Is Christian Anti-Semitism?

But the Bible can be used by twisted minds to say all sorts of things. Hateful people can interpret and quote Scripture in hateful ways and use it to support their anti-Semitic sentiments. When the Christian Scriptures are used by a professing Christian to denigrate the Jewish people and support anti-Semitic tropes and conspiracy theories, then it is referred to as Christian anti-Semitism.

What Is It Based On?

The theological foundation for Christian teaching against the Jewish people is what is known as replacement theology. Replacement theology posits that the Jews were cursed by God for their rejection of Jesus’ messianic credentials and therefore have been replaced by the church in the plans and purposes of God. Historically, this theology often led to the teaching of contempt for the Jews as “Christ-killers” and gave sanction to their maltreatment.

Where Is It Today?

Not everyone who holds to a form of replacement theology is anti-Semitic. Some theologians simply interpret the New Testament in this way—and therefore spiritualize much of the Old Testament to support it—but have absolutely no ill intent toward anyone. Many pastors hold replacement views as a theological assumption yet have never been taught the ramifications of such faulty hermeneutics required to support it.

This more benign form of American Evangelical replacement theology may not be the anti-Semitic version of the past that went on to call for the persecution and demonization of the Jews. Nevertheless, it is the same theological foundation from which Christian anti-Semitism sprouts, and we need to correct it in all its variants.

A well-known pastor of one of the largest churches in America has been publishing his concerns about the loss of Christian faith among young people. He blames the influence of Judaism and the Old Testament, which he describes as irrelevant and having been replaced with the “brand-new and different” teachings and ethics of Jesus. He portrays Judaism as hypocritical, self-righteous, and exclusivist, and claims the apostle Paul considered it an eroding influence on the beauty, simplicity, and appeal of the early church. He even goes so far as to blame the sins of the church throughout history on the influence of Judaism and the Old Testament.

Many scholars agree that the Holocaust could never have happened had it not been for the centuries of Christian anti-Semitism rooted in this type of theology. Therefore, we need to be very concerned about its growth and learn to refute it.

Another lesser-known Evangelical Christian preacher has gone further than theology and is espousing anti-Semitic conspiracy theories. Pastor Rick Wiles of the TruNews broadcast has a history of blaming the Jews for everything from the failure of the Iowa Democratic primary app to the impeachment proceedings against President Donald Trump—or what he called a “Jew coup.” He also claimed the coronavirus began at the mostly Jewish AIPAC Policy Conference and is spreading via synagogues because God is dealing with “false religions” and “people who oppose His son, Jesus Christ.”

While this generation is privileged to be part of a historic correction in the church’s relations with the Jews, it cannot be taken for granted. Anti-Semitism is on the rise, and dangerous trends within American churches need addressing to protect this budding relationship. It is the American church that can stop anti-Semitism from gaining more ground in the country, but we must begin at home and relegate “Christian anti-Semitism” to the dustbin of history.