The Mother Of Us All 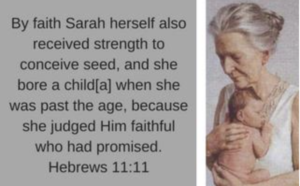 Hebrews 11 is the well-known New Testament Hall of Fame—or as some call it, Hall of Faith— because it lists the great heroes of the Old Testament who exhibited extraordinary faith. One such hero is Abraham.

We are familiar with Abraham’s story and the great faith he exhibited when he obeyed the voice of God and left his home, not knowing where he was going. He then lived in the land God promised to him by faith—as a pilgrim in temporary dwellings. His greatest act of faith was offering up his son Isaac, even though the Lord had told Abraham it would be through Isaac that his seed would continue. Abraham believed God would raise his son from the dead.

Often overlooked, however, is verse 11 of this chapter, which extolls Sarah’s great faith that bestowed on her the ability to conceive when she was past childbearing age. Indeed, she was already 65 years old when God made His initial promise to Abraham and was 90 by the time the child was born. She nevertheless knew that He who had made this promise to her was faithful and would keep it.

Not only did the apostle Paul call Abraham the “father of us all” who believe (Romans 4:16), but in Galatians 4:26 he implied that Sarah is “the mother of us all.” To understand how this can be, we must first understand the significance of the covenant God made with Abraham, and through him, his wife, Sarah.

The Pivotal Moment in the Biblical Story

The first 11 chapters of the book of Genesis set the stage for a pivotal moment that occurs in chapter 12. The backdrop is the detestable and hopeless condition of fallen mankind. But, in Genesis 12:1–3 a light is seen at the end of the tunnel. This is the moment when God spoke to Abraham and initiated His plan to redeem this fallen world.

The entire Bible hinges on that moment and, in fact, only makes sense once we grasp what God was announcing to Abraham. God told Abraham He would lead him to a land and he would become a great nation that would bless all of the families of the earth. The apostle Paul declared that the third verse of Genesis 12 which says, “In you all the families of the earth will be blessed,” was the first preaching of the gospel (Galatians 3:8). According to Paul, Genesis 12:3 refers to the great redemption that would be won for the world through the Christ, the Seed of Abraham, the Messiah of Israel.

But the plan hinged upon Abraham having a child—and his wife, Sarah, was barren. Though she was not named in the covenant, she was an integral part of it. She, too, would play a crucial role in the birthing of a nation that will bring about the great redemption of mankind and the blessing of all the nations. Her loving relationship with Abraham, which had caused her to give up everything and follow him to a land where they would live in tents as aliens, would produce a lineage that would change the world.

It All Depended on Sarah

And, so, she waited, for ten years. With each year that passed, Sarah must have felt more and more guilty. God had made such wonderful promises to her husband, but because she was barren, they were not coming to pass. She was the unnamed but implied partner in the covenant, and upon whom the covenant hinged—but by whom it was being blocked. Perhaps she felt like a complete failure.

Many a sermon has been preached about Abraham and Sarah’s lack of faith that caused them to devise the carnal plan of a surrogate mistress. However, the Bible never scolds them for losing faith; instead, they are memorialized in the Hebrews 11 Hall of Faith. They believed what God had promised would come to pass! Their error was concluding He would do it some other way than through Sarah, Abraham’s wife.

Their carnal minds probably reasoned God had never specifically said the child would come through Sarah. In fact, it was not until 13 years after Ishmael’s birth to Hagar that God explicitly stated the promised son would be through Sarah and would be named Isaac. At that point, Sarah was no longer an unrecognized party in the covenant. She had been called out by name. What should have been obvious from the start had finally been stated unequivocally: the child would come from Abraham’s wife.

Some 25 years after the promise was first given in Genesis 12, Sarah gave birth to Isaac at the age of 90. God’s plan all along was that Sarah would have her first and only son in her old age when it was humanly impossible. In this way, God would show His power, and there would be no doubt that this was His doing in fulfillment of His promise and His covenant.

Hence, from this point, the biblical record begins to tell the story of the nation God birthed through Abraham and Sarah, and through which He gave to the world the great redemptive products of the covenants, the law, the promises, and Christ Jesus the Messiah. Through Jesus’ atoning death the price was paid, and consequently, redemption has now been offered to all of the families of the earth.

Abraham and Sarah did not just birth a physical nation, but a family of believers. Through faith in Christ Jesus, we are Abraham’s spiritual seed and heirs to the promises; we have been grafted into the family tree of faithful followers. We, too, can call Abraham “father,” and Sarah, “our mother.”

Susan M. Michael is USA Director of the International Christian Embassy Jerusalem. Her writings can be found at www.icejusa.org/susans-blog.